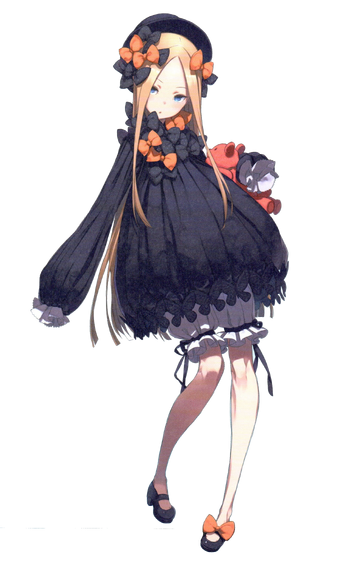 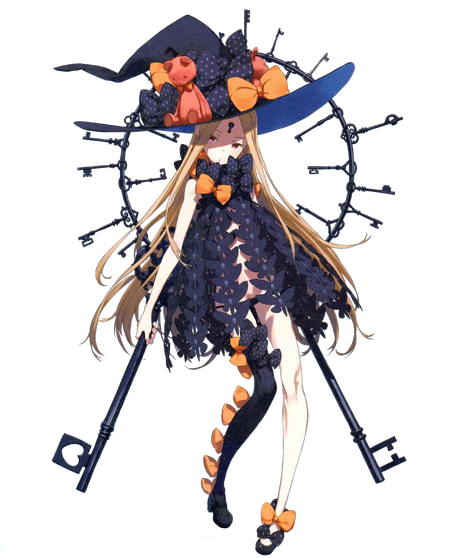 Foreigner's True Name is Abigail Williams, the first of the children to fling the accusations of witchcraft that would begin the infamous Salem Witch Trials. Normally, she would be far too weak an existence to be summoned as a Servant, but the Demon God Pillar Raum utilized her connection to superstition and madness to convert her into a Pseudo-Servant and the "Silver Key" that would bring the false god Sut-Typhon into the mortal plane.

Powers and Abilities: Superhuman Physical Characteristics, Summoning, Spatial Manipulation, Time Manipulation (Can travel to any point in space and time and cause distortions that can drive others insane), Portal Creation (Can access any point in time and space with the Silver Key), Memory Manipulation (Can restore the memories of others from across time and space), Summoning (Can summon the tentacles of Sut-Typhon to attack), Mind Manipulation, Pain Manipulation (Can inflict unimaginable torment on every living being on Earth to drive them all insane), Reality Warping (Can rewrite reality to restore herself from near-death. Can cause distortions in reality and warped the entirety of Salem), BFR (Can banish her foes into a gate incompatible with humanity), Servant Physiology

Attack Potency: Island level (Is considered a terrifically powerful threat that required five Servants, including the Queen of Sheba, Robin Hood, Circe, and Nezha, working in tandem to subdue and would eventually become unstoppable if left unchecked. However, in the earlier stages of her possession, Circe alone can subdue her), Multi-Solar System level with Reality Warping (Warped the fake Salem and turned it into a space with countless stars in the background) Many of her abilities ignore durability.

Speed: Massively Hypersonic (Fought against Robin Hood and Nezha at the same time), Immeasurable with portals (Can access any point in time and space and walk along the boundary between reality and fiction)

Lifting Strength: Superhuman (Her tentacles wrestled with the likes of Nezha. Even the weakest servant should be superior to the strongest athlete)

Durability: Island level (Withstood sustained magical attacks from Circe, a magus from the Age of Gods who taught Medea everything she knows). Her ability to overwrite her death makes her hard to kill.

Stamina: Limitless. Servants do not require food or sleep and Abigail has an unlimited supply of mana to sustain herself.

Range: Global with Mass Hysteria (Can cause unimaginable torment to every living creature on a global scale), at least Multiversal+ with her portals (Can access any point in Space and Time, and even the realm of the Outer Gods, beyond the multiverse).

Intelligence: Abigail is a mere 9-year-old girl from colonial Massachusetts. While she has some knowledge of the world outside, she was always kept sheltered by her parents and uncle. Upon becoming the Silver Key, Abigail became aware of everything happening across space and time and reaching into and learning about the modern world despite the efforts of the magi trying to contain her. She later learns how to control her powers from Randolph Carter, leaving an avatar of herself at Chaldea to assist the protagonist and restoring Sanson's memories despite not being formally trained as a magus.

Weaknesses: Despite her ability to open portals to any point in space and time, a sufficiently powerful group of magi, such as the Queen of Sheba and Circe working together or the entire Mage's Association, can put up a Bounded Field that can temporarily contain her, which also limited the number of times she could overwrite her death. Her deep attachment to Lavinia Whateley can snap her to her senses. Her Mass Hysteria can be contained by sufficiently powerful Mind Manipulation users with sufficient will to withstand it without going insane. Witch Trial draws the enmity of her foes toward her, making them more ilkely to want to kill her.

Retrieved from "https://vsbattles.fandom.com/wiki/Foreigner_(Abigail_Williams)?oldid=6091311"
Community content is available under CC-BY-SA unless otherwise noted.