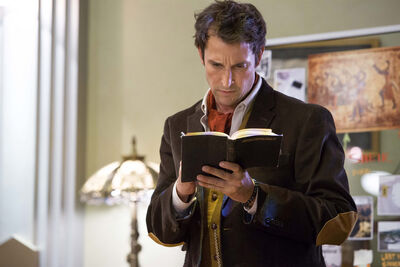 Flynn Carsen is one of the current Librarians and the son of Margie Carsen. He was once a perpetual student, earning several academic degrees with no real work experience before becoming the Librarian after the presumed death of the previous one. He is also one of the longest-surviving Librarians as Judson stated that he survived longer than most even without a Guardian for more than 10 years. He is currently the de-facto leader of the Librarians at 41 years of age.

Tier: Varies on the artifact he uses. 9-C physically, likely 6-B with magic | 5-B with Excalibur | 4-C with the Nemesis Star | Low 2-C with the Book of Solomon | 1-C with Ariadne's Thread

Attack Potency: Varies on the artifact he uses. Street level physically (Can easily match against quite strong enemies and is far above the likes of Eve Baird and Jacob Stone), likely Country level+ with magic (Could battle King Arthur's Crown for the control of Excalibur, although he was defeated. Should be somehow comparable to Santa Claus) | Planet level with Excalibur | Star level (The Nemesis Star is a sun-sized celestial body) | Universe level+ with the Book of Solomon | Complex Multiverse level with Ariadne's Thread (Can create and control a 7-Dimensional space and even repair the Loom of Fate, which is the fabric of all reality). Can negate conventional durability with many abilities.

Speed: Peak Human. Massively Hypersonic+ attack speed (He can shoot lightning from his hands) | Likely Immeasurable when under influence of the Loom of Fate (Could move beyond the range of the River of Time, from where all time flows)

Intelligence: Genius (A nerdish bookworm, Flynn is brilliant beyond compare. By the time he was 31 years old Flynn had obtained 22 academic degrees: 12 Bachelors, 6 Masters, and 4 Ph.D.s. These included four in Egyptology, a Ph.D. (or two) in Comparative Religions, a Ph.D. in Cryptology, and "degrees in every language you can imagine." Two of his Ph.D's are in 15th, and 17th Spanish Literature. Whether or not he returned to school again is unknown, as this would potentially put his total number of Ph.D.s. at 5. In fact, his accumulated knowledge rivals the knowledge of all the others Librarians combined.).

Weaknesses: He is a normal human and can be killed by anything which can kill a normal human (although it is not applicable if he drinks from the Holy Grail)

Keys: Base | With Excalibur | With the Nemesis Star | With the Book of Solomon | With Ariadne's Thread