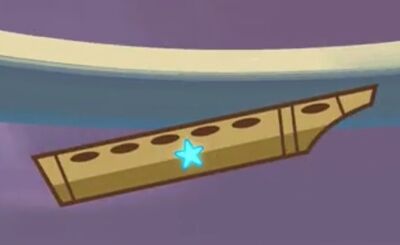 Tier: 9-B physically, High 6-B with its abilities.

Attack Potency: Wall level physically (Knocked away the Newmans, who were shown to be comparable to Grojband), Large Country level with its abilities (Caused the Chicxulub Impact Event in the form of a bassoon)

Lifting Strength: Unknown (Was able to resist Corey's attempts to unequip it and even tied him down with a guitar strap it produced)

Durability: Wall level in its physical forms (Corey smashed the Flute in its guitar form, yet it came back as a music box), Unknown as its true self

Range: Extended Melee Range physically; Tens of kilometers (the meteor that wiped out the dinosaurs was 90 kilometers in radius)

Standard Equipment: Whatever form it takes on.

Weaknesses: Most of its abilities can only be used if someone plays whatever instrument it takes on. Likely opportunistic. Like the Pink Star of Rocklympus, it can be weaponized by someone stubborn enough; this was how Trina Riffin was able to make use of the Pink Star's abilities during Diary Mode.

Retrieved from "https://vsbattles.fandom.com/wiki/Flute_of_Rocklympus?oldid=5499904"
Community content is available under CC-BY-SA unless otherwise noted.