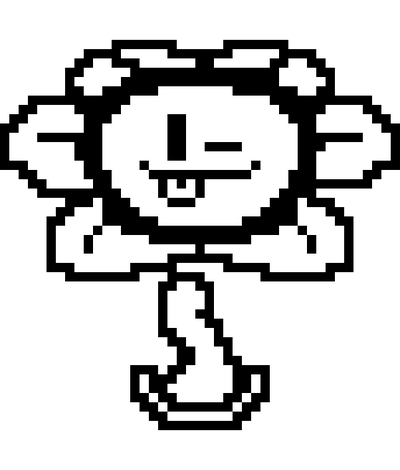 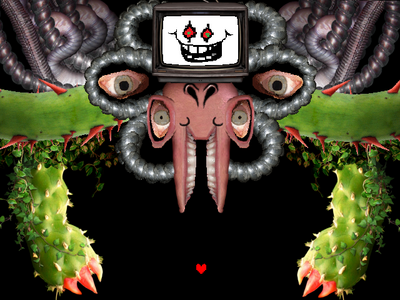 Flowey the Flower is one of the main antagonists in Undertale. He first appears in the Ruin, attempting to kill Frisk for their soul before being chased by Toriel. Following this event, the flower will stalk Frisk through the Underground, something appearing to mock them before culminating in him taking the Six Human SOULs for himself and becoming an almost godlike being, Photoshop Flowey.

It is eventually revealed that Flowey is a flower brought to life by having Determination injected into it that holds Asriel Dreemurr's conscience and memories.

Age: Pre-teen when killed, unknown since he became a flower

Superhuman Physical Characteristics, Magic, Non-Physical Interaction (Magic is shown to be capable of harming ghosts, as shown in the Mad Dummy fight where magic attacks are the only way to harm him as opposed to physical attacks), limited Acausality (Type 1; Capable of keeping memories of reset events, although other factors such as his increase in strength or damage he sustained will be lost. With his "control over the timeline"/Time Manipulation matched, repeated deaths make his grip in the "world" slip away, which can eventually result in him forgetting everything experienced little by little), Time Travel, Time Manipulation (Can LOAD time to a previous SAVE in time. Even after dying he can LOAD back time simply by not wanting to die), Soul Manipulation (Can attack one's soul with his regular attacks. Destroyed Asgore's soul in a single attack), Absorption (Can absorb souls), Plant Manipulation, Danmaku, Resistance to Heat Manipulation (Followed Frisk in the Hotlands, which reached temperatures high enough to vaporize a styrofoam cup and water instantly), Immunity to Soul Manipulation (Due to lacking a soul)

Attack Potency: Small Building level (Capable of casually crippling a minimally Determined Frisk). Should be able to trade blows with opponents capable of harming him) normally, Varies depending on his amount of EXP and LOVE (Flowey's level of strength varies with his LV, which increases when he kills enemies. He has grown strong enough to kill everyone in the Underground on multiple occasions. Although his LV goes back to zero when he resets) | At least Low Multiverse level, likely Multiverse level (Completely overpowered Frisk's Determination, allowing him to completely obliterate Frisk's last SAVE. It should be noted that SAVEs are entire timelines, meaning he completely undid all of Frisk's progress. Created many SAVEs during his fight with Frisk, just so he could hit them if he had missed or so he could have the joy of watching Frisk die as many times as he wanted. Flowey also performed Chara's game destroying feat, and was directly stated to be more powerful than the child. Omega Flowey being more powerful than Chara is also supported by the fact he is supposedly "Lvl 9999", while Chara only reaches lvl 20.)

Lifting Strength: Unknown (Capable of keeping the doors of an elevator shut with his vines) | Immeasurable

Striking Strength: Small Building Class, Varies depending on his amount of EXP and LOVE | At least Low Multiversal, likely Multiversal

Durability: Small Building level (Took a hit from Toriel, although it is unknown how serious she was), Varies depending on his amount of EXP and LOVE | At least Low Multiverse level, likely Multiverse level (Completely unable to be significantly harmed by Frisk until the six souls began to aid them)

Intelligence: Immensely high, as Flowey has lived out nearly every possible outcome of the Underground, he knows how to outsmart pretty much everyone. That is, until Frisk came along, who seems to be a variable he can never pin down.

Weaknesses: Similar to Frisk, whenever a reset occurs, his LOVE and stats drop back down to their base. | Does not have full control over the six souls which power him, and someone as determined as Frisk was able to make them leave his body. 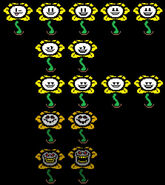 A small sampling of Flowey's many faces. (Coloring credit goes to askoneclassyprospitianlady.tumblr.com)

Lord of Games (Banjo-Kazooie) Lord of Games' Profile (Omega Flowey was used, and speed was equalized)