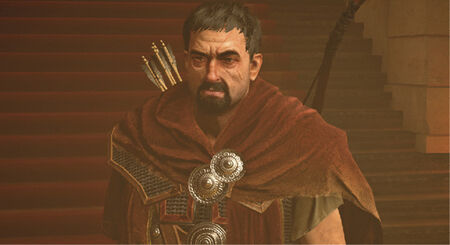 Flavius Metellus (c. 90s BCE – 47 BCE), also known as The Lion, was the Roman proconsul of the province of Kyrenaika. He was also a leader of the Order of the Ancients during the reign of Cleopatra and a close ally of Julius Caesar.

In 49 BCE he joined the Order of the Ancients and became their leader. He later researched the temple in Siwa, and when the Temple's priests refused to cooperate, they coerced the then-Medjay Bayek to open it for them by holding his son Khemu hostage. Bayek tried to stop them and had Flavius pinned with a knife, but Flavius simply redirected it into Khemu, instantly killing the boy, and knocked Bayek out and left him for dead. However, Bayek had survived this, and was now hunting down every single member of the Order.

In 47 BCE, Flavius accompanied Caesar during his pursue of his son-in-law Pompey. Arriving in Alexandria, they were greeted by Ptolemy XIII, who presented the head of Pompey to Caesar, in hopes of gaining an alliance. During their meeting however, they were interrupted by the arrival of Aya, Bayek and Apollodorus, who carried Cleopatra into the palace within a rug. When Ptolemy demanded his guards to eliminate them, Flavius clashed with the guard but stood down at Caesar's command. Caesar demanded an audience with Cleopatra alone, ordering Flavius and Cleopatra's followers to leave the building.

Later on Flavius entered and reported to Caesar that Lucius Septimius, the Gabiniani, and Ptolemy's forces had attacked the Roman legions. After the battle, Flavius used his considerable political power to have his fellow Order member Septimius spared from judgement and even offered Septimius a position next to Caesar himself, an act which greatly enraged Bayek and Aya. While the city celebrated Caesar's success, Flavius and Septimius broke into the Tomb of Alexander the Great to retrieve his staff, but were encountered by Apollodorus who had begun to suspect Caesar and Cleopatra and their actions and intentions. They managed to wound him and steal the Apple from him, after which Flavius and Septimius headed back to Siwa to finish what they had started two years ago, resulting in the deaths of Apollodurus and Bayek's friend Hepzefa.

After leaving the chamber, Flavius marched to Cyrene, where he had been appointed proconsul. Bayek had tracked him down to the city, and they clashed inside the Roman Akropolis. Despite Flavius' use of the Apple, Bayek was able to defeat him, and thus finally avenged both Hepzefa and Khemu.

Tier: At least 9-A physically, higher with his sword and the Staff of Eden

Classification: Roman Proconsul of Cyrene, Leader of the Order of the Ancients, later becomes co-leader alongside Julius Caesar

Attack Potency: At least Small Building level+ physically (Somewhat stronger than and can easily knock Bayek out in a single hit. On par with his Apple of Eden clones, which can damage Altaïr Ibn-La'Ahad), higher with his Sword and the Staff of Eden (Should at the very least be comparable to Rodrigo Borgia, who can damage Ezio Auditore da Firenze)

Speed: At least Supersonic+ (Easily kept up with a rage-fueled Bayek without needing the assistance of the Apple's precognitive powers and is somewhat swifter than him in some aspects), higher with the Staff of Eden

Lifting Strength: At least Class 5 (Easily wrestled with Bayek many times. As a high-ranking proconsul, he should easily be vastly superior to most low-ranking footsoldiers in the game, who can easily overpower hippos, crocodiles and lions on their lonesome), higher with the Staff of Eden (Should be comparable to Tsar Alexander III, who lifted and tipped aside a train carriage with some effort)

Striking Strength: At least Small Building Class+, higher with the Staff of Eden

Stamina: Extremely High (Even when heavily injured he could still keep fighting)

Standard Equipment: A Roman longsword, Apple of Eden #2, the Staff of Eden (Temporarily)

Intelligence: Gifted. When in control of the Oracle's Relic, Flavius displayed a number of miraculous abilities. He was shown to possess the power to control the wills of the people and make them do things they would never do such as make them walk into a fire, force them to willingly allow themselves to be eaten by a lion, write his name on walls, dance themselves to death, murder each other, recite love poems devoted to him, make women leave their familes and proclaim their love for him, turn them into rapists and recite Order of Ancients propoganda. He was also able to create tangible-holograms of his former brothers which attacked Bayek. He could also turn invisible, project golden energy and fire a kinetic blast which slowed down Bayek momentarily. He was also a skilled swordsman and hand-to-hand combatant.

He was a strong political leader and mastermind, having become the leader of the Order of the Ancients. He was also able to use his influence to convince Caesar to spare Septimius despite the fact that Septimius attacked Roman forces.

Retrieved from "https://vsbattles.fandom.com/wiki/Flavius_Metellus?oldid=5802036"
Community content is available under CC-BY-SA unless otherwise noted.