Flare Corona (フレア・コロナ, Furea Korona) is a Mage and a former member of the Raven Tail Guild, as well as one of its elite members. At a young age, Flare was found and raised by the giants of the Sun Village. Later on, as a blessing of the Eternal Flame, Flare received the ability to manipulate her hair in any way she wished. However, as time progressed Flare noticed the obvious difference between herself and the giants, and decided to leave and travel to meet others the same size as her. Her lack of knowledge about the outside world made her fearful though, and upon meeting the members of Raven Tail she joined them happily, oblivious to their malicious personalities and unnatural hatred towards Fairy Tail; something she assumed was just natural and common for people outside her village.

Speed: Massively Hypersonic+ (Kept up with Lucy and Hiroshi, the latter who kept up with Gray)

Durability: City level (Took hits from Gemini and Lucy's Fleuve d'étoiles. She also took an attack from a casual Laxus)

Weaknesses: Her hair can be cut and knotted. 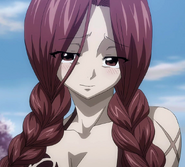 Retrieved from "https://vsbattles.fandom.com/wiki/Flare_Corona?oldid=5564842"
Community content is available under CC-BY-SA unless otherwise noted.