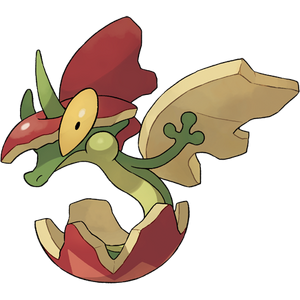 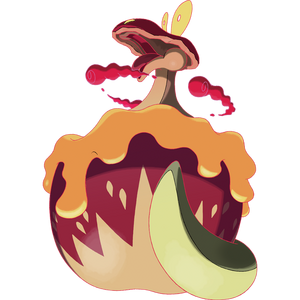 Flapple is one of two possible evolutions for Applin, which is achieved by feeding Applin a Tart Apple. Like Appletun, Flapple is one of few pokemon capable of Gigantamaxing. Curiously however, unlike other Gigantamax Pokémon, Flapple and Applin have an identical G-Max appearance, though they still differ slightly in abilities.

Speed: Relativistic+ (Comparable to other two-stage final evolutions like Sylveon)

Range: Below Average Melee Range, Hundreds of Meters with most attacks

Weaknesses: Weak to Flying, Poison, Bug, Dragon, Fairy, and especially Ice-Type moves | Gigantamax can only be used in areas with Dynamax energy (i.e. dens and stadiums), Destroying the forcefield damages the pokemon