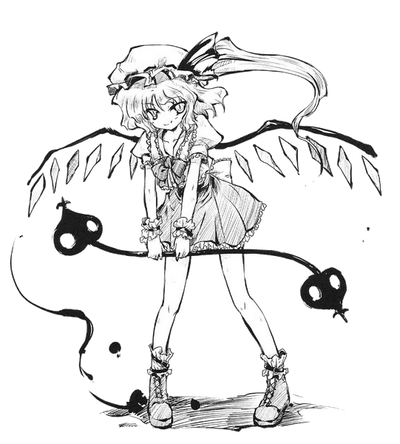 Flandre Scarlet (フランドール・スカーレット) is the younger sister of Remilia Scarlet and a vampire who has lived at the Scarlet Devil Mansion for over 495 years.

Powers and Abilities: Superhuman Physical Characteristics, Magic, Flight, Danmaku, can destroy virtually anything by crushing its "eye", Duplication, can transform into flocks of bats or a cloud of mist, Non-Physical Interaction (Can harm Phantoms and Evil Spirits with her regular attacks), Resistance to Mind Manipulation (Youkai can resist the effects of the true Moon, which can drive humans insane and kill them if they look at it), Immortality (Types 1 and 3), Regeneration (Low-Godly; Can regenerate solely from her incorporeal "Mind". High-Mid against spiritual attacks; can regenerate from just her head)

Attack Potency: High Universe level, possibly Universe level+ (Stated in her EoSD profile that her power exceeds that of her sister and by extension Patchouli). Her ability also ignores conventional durability.

Speed: Massively FTL+ (Should be at least as fast as Remilia and Patchouli)

Lifting Strength: At least Class 25 (Stronger than Remilia. Vampires are said to be able to uproot thousand-year-old trees).

Range: At least Tens of Meters with Danmaku (Her firing range should be comparable to Sakuya's, who can throw knives at least 36 meters), at least Hundreds of Kilometers with her ability to destroy (Using her ability, she destroyed a meteor in the atmosphere)

Weaknesses: Flandre is burnt when exposed to sunlight or roasted soybeans, and cannot cross flowing water, nor approach a broken holly branch or the head of a sardine. She is also vulnerable to spiritual attacks. 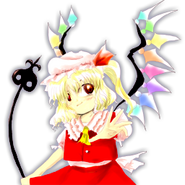 Flandre in the Embodiment of Scarlet Devil 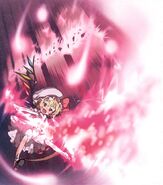