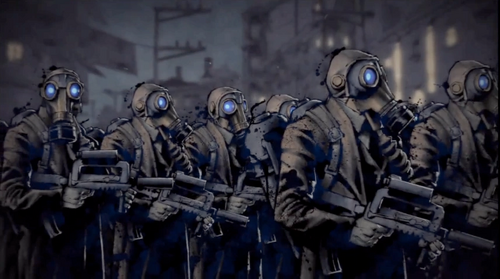 The First Sons were a secret society dedicated to the advancement of humanity by transhuman means. To this end, they had researched how to grant or enhance abilities such as telekinesis, electrokinesis, and various other enhancements of the human body. They were led by the mysterious Kessler, who seized power after a coup against former leader Richard Tate.

The First Sons had a vast reach and immense influence, including connections with the Empire City Police, public figures and billionaire philanthropists like Joseph Bertrand, government agencies such as the NSA, FBI, and DARPA, and even had then President Navarro under their thumb. After the Empire City Blast, the organization operated openly in the Historic District, where they were eventually destroyed by Cole MacGrath.

Civilization Type: At least Post-Industrial Civilization (Their technology is a hundred years ahead of the modern world, and leaves even the most brilliant modern scientists in shock and making them think they've been abducted by aliens)

Age: Over 600 years (Existed before America had been discovered in 1492)

Population: Millions of soldiers, scientists, public and political figures around the world

Territory: Secretly control dozens of government around the world, including the United States government

Industrial Capacity: Their technology is a hundred years ahead of the modern world, and leaves even the most brilliant modern scientists in shock and making them think they've been abducted by aliens. They were able to create the Ray Sphere in a few decades, which originally took over a century to perfect. Specializes in transhumanism and genetic mutation, and perfectly understand the Conduit's superhuman physiology, to the point they can create cloaking and forcefield technology from studying the Aura and Invisibility Conduits, and could easily use the powers of the Conduit's like Sasha to create an areosol toxin capable of enslaving the minds of an entire city of 10.5 million.

Retrieved from "https://vsbattles.fandom.com/wiki/First_Sons_(inFAMOUS)?oldid=5775056"
Community content is available under CC-BY-SA unless otherwise noted.