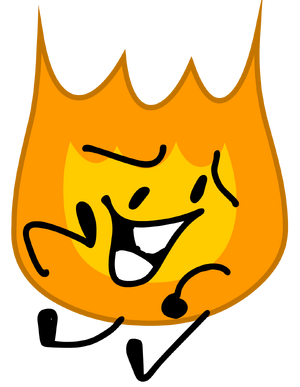 Firey is a contestant of Battle for Dream Island. He usually tends to be childish in nature, as well as being very forgetful about what happened. Despite this, Firey is determined to win, even winning Dream Island at some point (before Leafy bought out Dream Island as revenge for Firey not letting her in).

Powers and Abilities: Superhuman Physical Characteristics, Fire Physiology and Resistance to it (Is a living ball of fire), Toon Force, Breaking the Fourth Wall (Was able to change the shape of the screen alongside with the rest of the contestants), Self-Sustenance (Type 1) (Can breathe in the vacuum of space), Vehicular Mastery (Has been shown to operate a spaceship very easily), Resurrection (via the Firey Recovery Center), Deconstruction (Via the Emergency Button), Resistance to Poison Manipulation (Is immune to poison) and Extreme Cold (Unaffected by the temperatures of space)

Attack Potency: City level+ (Should be able to harm those on his level of durability, comparable to Needle, whose energy was this while being sent to her Star-sized Cake in a few seconds)

Speed: Massively Hypersonic+ (Able to keep up with other contestants, which would include Puffball, who could fly from space back to Earth in roughly a minute, and claims to be a "fast runner") with Sub-Relativistic attack speed via powerscaling (Comparable to Coiny, who could throw a stick 2,760 miles in a second)

Lifting Strength: Class 5 (Comparable to Loser, who lifted one of X’s baskets with ease)

Durability: City level+ (Should be able to tank blows from those who can harm him)

Stamina: Very High (In “Lofty”, he was able to climb up a flight of stairs along with the other contestants without seemingly stopping for 16 days)

Intelligence: High (Managed to build his own speaker box and a ferris wheel, and is capable of operating a spaceship)

Weaknesses: Will die if his body gets doused with water, and he has acrophobia

Start a Discussion Discussions about Firey (Battle for Dream Island)