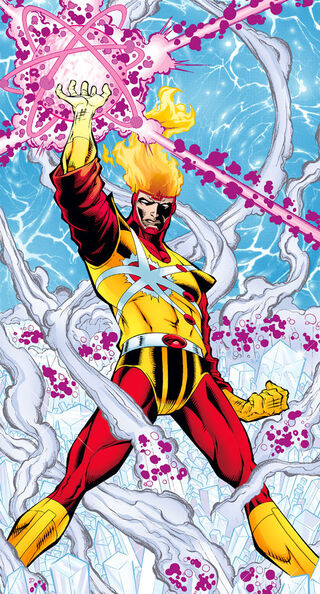 The original Firestorm was distinguished by his integrated dual identity. High school student Ronnie Raymond and Nobel Prize-winning physicist Martin Stein were caught in a nuclear accident that allowed them to fuse into the "nuclear man" Firestorm. Due to Stein's being unconscious during the accident, Raymond was prominently in command of the Firestorm form with Stein as a voice of reason inside his mind. The banter between the two was a hallmark of their adventures.

After the accident that created him, Firestorm took to defending New York from such threats as Multiplex (created in the same nuclear accident that produced Firestorm) and Killer Frost. His list of enemies also included such generally forgotten foes as the Hyena, Zuggernaut, Typhoon, Silver Deer and Black Bison. Their adventures began with the teenaged Raymond adjusting to his newfound role and later delved into the issue of the nuclear arms race and Firestorm's role as an "elemental." Upon graduation from high school, Raymond entered college in Pittsburgh, where Stein had been hired as a professor.

After the Crisis, Firestorm was pitted against the world, as the hero, acting on a suggestion from a terminally ill Stein, demanded the United States and the Soviet Union destroy all of their nuclear weapons. After tussles with the Justice League and most of his enemies, Firestorm faced off against a Russian nuclear man named Pozhar in the Nevada desert, where they had an atomic bomb dropped on them. When the smoke cleared, a new Firestorm was created who was made up of Raymond and the Russian, Mikhail Arkadin (the Russian superhero Pozhar), but controlled by the disembodied amnesiac mind of Stein.

Speed: Massively FTL+ combat speed (Able to react to Darkseid's Omega Beams), Sub-Relativistic flight speed (Can fly from another planet to the Moon in a brief amount of time)

Intelligence: Above Average. Ronnie is a successful high school student. Martin Stein is at least a Genius, as one of the most intelligent scientists on the DC Comics version of Earth.

Weaknesses: Needs to concentrate really hard to know what structure he needs to make. Cannot affect organic matter, and if he tries, he gets harmed by harmful energy feedback.

Retrieved from "https://vsbattles.fandom.com/wiki/Firestorm_(Ronnie_Raymond)_(DC_Comics)?oldid=6189238"
Community content is available under CC-BY-SA unless otherwise noted.