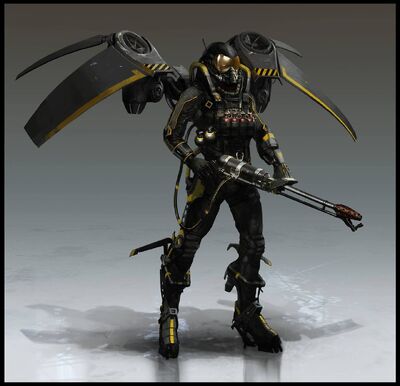 Garfield Lynns, known as Firefly, is an antagonist in the Batman: Arkham series.

Lynns was one of the eight Assassins hired by Black Mask to kill Batman for fifty million dollars during Christmas Eve. During that night, he tried to destroy Gotham's Pioneer Bridge but Batman managed to stop him. Years later, Firefly came back, taking advantage of Scarecrow's attack on Gotham to destroy fire-stations and get his revenge against the Dark Knight.

Tier: 10-B, possibly 10-A by himself | At least 9-A, likely 8-C with fire-based weapons, higher with Preparation

Powers and Abilities: Fire Manipulation (With various weapons), Explosion Manipulation (With grenades and various weapons), Pain Tolerance (Burned on more than 90% of his body but it doesn't seem to affect him), Master scientist and Talented Engineer, Preparation | All the abilities without suit, plus: Flight, Resistance to Fire, Explosions and Heat (His suit protects him against fire and heat)

Attack Potency: Human level, possibly Athlete level by himself | At least Small Building level, likely Building level with fire-based weapons (Incinerated Gotham's fire-stations during Scarecrow's attack. His flame thrower is powerful enough to damage the Batmobile. Can destroy buildings with his weapons), higher with Preparation (Firefly trapped Gotham's Pioneer Bridge with enough explosives to have the resulting explosion be heard throughout at least Gotham City, if not the entire eastern seaboard region of the United States

Speed: Unknown by himself | Subsonic with his suit (Can follow the Batwing and is a little faster than the Batmobile)

Durability: Small Building level with his suit (Survived when Batman caused him to crash on the Pioneer Bridge. His suit protects him against fire, explosions and heat)

Range: Tens of meters with weapons

Standard Equipment: Various self made fire-based weapons such like his flame thrower, explosive grenades, his suit, his jetpack

Intelligence: High. Firefly is a master of pyrotechnics and explosives as well as a very qualified engineer, having designed very advanced incendiary weapons such as his flamethrower as well as a fireproof suit protecting him from high heat by his own means. While chasing him, Batman mentions that the accelerant in his flamethrower is petroleum-based napalm, with polyisobutene, a synthetic rubber, as the gelling agent, suggesting that Lynns also has some aptitude in chemistry.

Weaknesses: Completely obsessed with fire. His equipment can be damaged and his jetpack can run out of fuel.