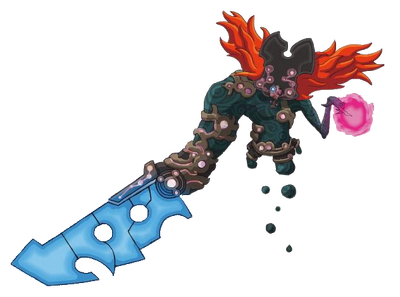 Fireblight Ganon is one of the four phantoms Calamity Ganon had created during the Great Calamity a century prior to the events of Breath of the Wild. Fireblight Ganon was responsible for the death of Daruk and kept his soul imprisoned in the Divine Beast Vah Rudania which it had also taken control of. When Link awoke from his stasis he eventually made his way into Vah Rudania within Death Mountain and destroyed the phantom, freeing Daruks spirit who took back control of the Divine Beast.

Powers and Abilities: Superhuman Physical Characteristics, Inorganic Physiology (Its body is composed of malice and Shiekah tech), Self-Sustenance (Types 1 and 2), Immortality (Type 1), Weapon Mastery (Is highly skilled with its greatsword), Large Size (Type 0) Magic, Fire Manipulation (Including homing fireballs), Forcefield Creation, Limited Air Manipulation, Flight, Intangibility (Elemental, can turn itself into energy), Teleportation, Absorption and Fusionism (Absorbed and fused with Shiekah weapons), Power Mimicry (Copied the fire based abilities of Vah Rudania), Poison Manipulation (A large chunk of its body is composed of Malice, a poisonous substance that harms those who touch it), Soul Manipulation (Kept Daruks spirit trapped within Vah Rudania), and Technology Manipulation (Took complete control of Vah Rudania). Resistance to High Temperatures (Unaffected by the heat of Death Mountain, which is hot enough to cause most people to spontaneously combust) and Existence Erasure (Is only harmed by Ancient Arrows as opposed to being erased)

Speed: Massively Hypersonic+ with Relativistic reactions and combat speed (Slower than the other Blight Ganons but still comparable to them, kept up with Link)

Durability: Multi-Continent level (Can take many attacks from Link and is able to tank it's own reflected attacks)

Stamina: Very high, fought a prolonged battle with Link and sustained many severe injuries without showing signs of tiring.

Range: Extended melee range (Is several times larger than the average person), at least hundreds of kilometers with magic and energy blasts.

Intelligence: Above average, should be just as intelligent as Windblight Ganon.

Weaknesses: Vulnerable to weapons made with Shiekah technology, weak to holy and ice based weapons and attacks, and it will be stunned for several seconds if it receives direct attacks to its eye.

Retrieved from "https://vsbattles.fandom.com/wiki/Fireblight_Ganon?oldid=5129287"
Community content is available under CC-BY-SA unless otherwise noted.