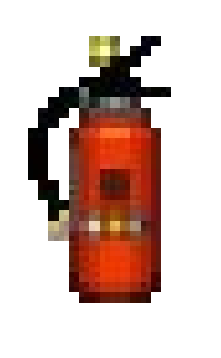 The Fire Extinguisher is one of the main protagonists of Toilet in Wonderland. Mira first encounters it in Mario's house. At first upon examining it, it seems to be an inanimate object. But later on she puts out a fire by throwing the Fire Extinguisher at it. After this, the Fire Extinguisher seemingly comes to life and yells at her for not knowing how to use a fire extinguisher properly. Later then, it saves her from an entire horde of Mario clones by wiping them out with one attack. Its final appearance is during the final climactic battle with IT.

Tier: At least 9-B, possibly 8-B, higher via Self-Destruction Attack

Powers and Abilities: Superhuman Physical Characteristics, Inorganic Physiology (Type 1), Explosion Manipulation, Telepathy, Self-Destruction, Resistance to Fire Manipulation (Mira threw it at a fire that was blocking off an entire hallway, and the flames vanished upon contact)

Attack Potency: At least Wall level (Knocked out nine of Mario's clones, each of which are capable of one-shotting Mira, in a single attack, casually wiped out eight more by charging through all of them in a straight line), possibly City Block level+ (Dealt major damage to the Avatar of Irregularity), higher via Self-Destruction Attack (In the normal ending, it dealt more damage to the Avatar of Irregularity than the entire party did combined in the true ending)

Speed: At least Supersonic (Should be comparable to Bottom)

Durability: At least Wall level, possibly City Block level+ or higher (Its body is completely undamaged by the explosion its Self-Destruction Attack causes)

Intelligence: Can speak like a human and seems to have a fundamental understanding for how a Fire Extinguisher would work, otherwise unknown

Weaknesses: Struggles to walk and will occasionally stumble over due to its lack of feet.

Retrieved from "https://vsbattles.fandom.com/wiki/Fire_Extinguisher_(Toilet_in_Wonderland)?oldid=4535277"
Community content is available under CC-BY-SA unless otherwise noted.