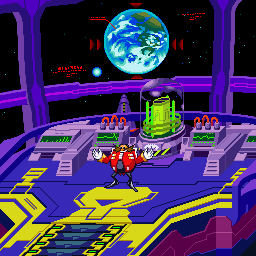 The Final Egg Blaster is a weapon created by Doctor Eggman and is likely his strongest creation yet. A cannon with the power to destroy entire star clusters, it was used to reactivate Emerl's original programming. This caused the Gizoid to attempt to destroy Earth with the weapon, but he was stopped by Sonic and the Final Egg Blaster was deactivated.

Classification: Weapon of Mass Destruction, an extension of the Death Egg.

Attack Potency: Multi-Solar System level (It is capable of destroying multiple star systems in one burst)

Weaknesses: Takes a minute to recharge after unleashing an immensely powerful blast.