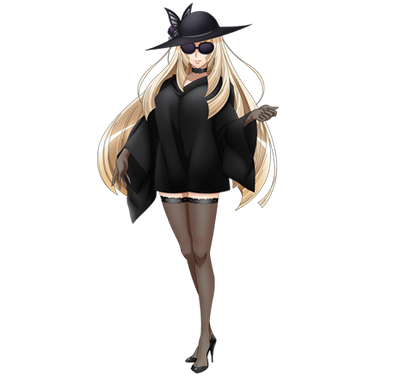 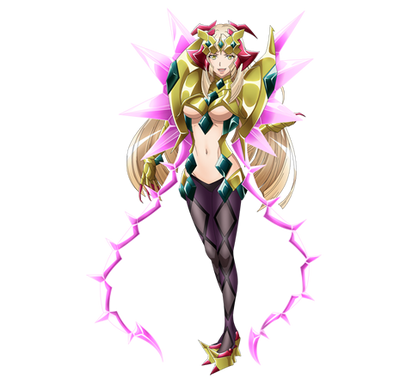 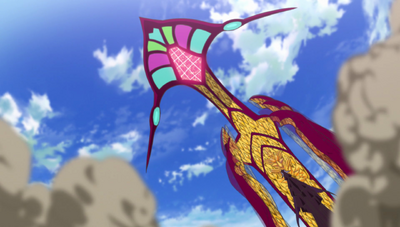 Finé is was the primary antagonist of Senki Zesshou Symphogear's first season. She took possession of the scientist Ryōko Sakurai after the activation of the Ame no Habakiri by Tsubasa. She work secretly to bring the end of the Curse of Balal by using her most recent invention, the Kadingir.

Tier: High 6-A, possibly 5-C, much Higher with Red Dragon of Revelations

Powers and Abilities: Superhuman Physical Characteristics, Regeneration (Likely Mid, was unaffected when part of her head was severely cut off), Possession and Soul Manipulation (Can consume the soul of her host), Immortality (Types 3 and 6), Expert whip user, Can summon Noises, Forcefield Creation, Fusionism, Telekinesis, Large Size (Likely Type 2 as RDR)

Attack Potency: Multi-Continent level+, possibly Moon level (Fought casually with Tsubasa and a Berserk Hibiki), higher with Red Dragon of Revelations (Can fight the girls in their X-Drive form, the latter needed a special move to defeat her)

Speed: Relativistic (Can fight on par with Tsubasa and Hibiki)

Durability: Multi-Continent level+, possibly Moon level (Can take hits from a berserk Hibiki), Higher with Red Dragon of Revelations (The girls needed a special move to defeat her).

Stamina: High, can take actions even when her body is on the verge of death.

Range: Planetary (Her whips are capable of reaching the moon in about 13 seconds)

Intelligence: Genius, she has knowledge of human history worth millions of years, is very calculating and manipulative. She skillfully impersonated Ryōko Sakurai to almost complete success until the end of Season 1. As a skillful scientist, Finé developed the Symphogear System to use as a tool to secure funding to create Kadingir, created LiNKER and used Kanade Amō as a test subject for it, and made Chris awaken Solomon's Cane and then used her as a test subject for the stolen Nehushtan Armor. She also performed various other related experiments, all while building her magnum opus, the Kadingir, right in plain sight under everyone's noses.

Retrieved from "https://vsbattles.fandom.com/wiki/Fin%C3%A9_(Senki_Zesshou_Symphgear)?oldid=5163870"
Community content is available under CC-BY-SA unless otherwise noted.