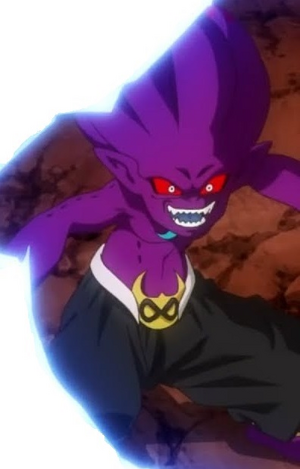 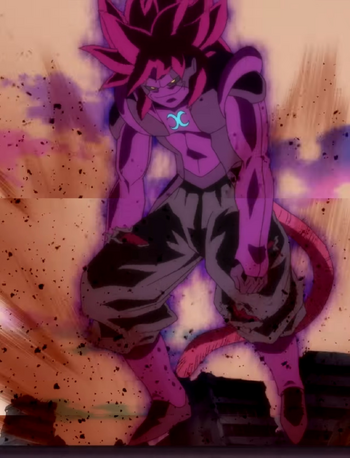 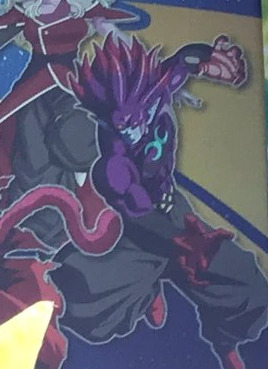 Fin is a Majin created by Towa that absorbed GT Gogeta and became Dark Gogeta. He would later absorb Mira to become Dark Mira.

Age: A few minutes old on his first appearance

Powers and Abilities: Superhuman Physical Characteristics, Acrobatics, Accelerated Development (Training; Physical Stats, Abilities), Ki Manipulation (Can be used defensively and offensively, to strengthen his skin or to fire ki blasts, which can home in on targets, and form defensive barriers), Immortality (Types 1 and 3), Self-Sustenance (Types 1, 2 and 3), Ki Sensing, Spaceflight, Enhanced Senses, Absorption (Absorbed Gogeta to become Dark Gogeta, as well as having absorbed some of Mechikabura's Demon God energy), Elasticity, Body Control (As a Majin, Fin has an elastic and amorphous body that he can control as he pleases), Possibly Sound Manipulation and Portal Creation (Characters stronger than or equal to Super Boo and SSJ3 Gotenks should be able to perform the Vice Shout through sheer power), Regeneration (Mid-High, His regenerative capabilities should be comparable to that of other Majin), Telekinesis (Should be able to do this just as other Majin), Power Mimicry (Should be comparable to other Majin who can learn techniques after seeing them once), Transmutation (Like all Majin, he should be able to use Candy Beam), Resistance to Poisons, Extreme Cold and Cosmic Radiations | All previous, Energy Manipulation (Gogeta was able to purify Janemba's evil energy and covert the Negative Karma Ball into positive energy), Reactive Power Level (As a Saiyan, Gogeta grows stronger every time he fights and can become stronger in the midst of combat, vastly increasing in strength whenever he is mortally injured), Light Manipulation (Gogeta can create flashes of light to blind opponents), Duplication (Gogeta can create split himself into multiple clones by using the Multi-Form technique), Afterimage Creation, Pressure Point Strikes, Soul Manipulation (Gogeta purified and destroyed Janemba, including its evil souls), Healing, Self-Destruction, Telepathy (Can telepathically communicate with others and read minds), Teleportation and Dimensional Travel, Statistics Amplification (Should be capable of using Kaio-ken to greatly enhance his capabilities by potentially up to a hundred times), Transformation (Gogeta was a Super Saiyan 4 when he was absorbed by Fin), Creation (Gogeta created and released confetti and streamers), Resistance to Mind Manipulation (Vegeta overpowered Babidi's hold on his mind, so Gogeta should be able to do the same), Paralysis, Sleep Manipulation, Heat Manipulation, Adapted to Gravity, All of Mira's abilities and resistances as Dark Mira

Stamina: Infinite due to his nature as a Majin.

Intelligence: Fin is monstrous and almost animalistic in intelligence, but shows some skill in combat as he's able to battle even martial arts masters with many decades of experience like Gogeta. Fin should possess all of Gogeta/Mira's abilities and skills as Dark Gogeta/Mira.