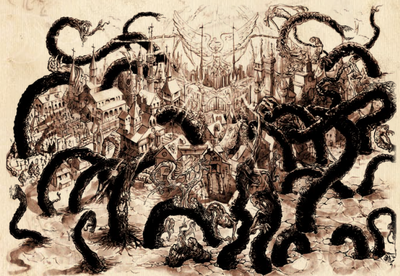 Classification: Golem created from the souls of the Sylvains, Sleeper

Powers and Abilities: Superhuman Physical Characteristics, Large Size (Type 3. The size of a small city), Resistance to Elemental Manipulation (Any element aside from ice and water cause only half damage), High Resistance to Magic, Poison Manipulation, Disease Manipulation, Void Manipulation and Time Manipulation (Beings of elevated gnosis can survive being in the Primordial Void for few days. Beings of gnosis 40 or higher can resist to Time Manipulation, being aware of any change in the timestream and their damage can't be negated by manipulating time), Regeneration (High-Low normally, Mid via absorption), Extrasensory Perception (Capable to see supernatural beings, magic and psyquic matrixes. Beings of gnosis 40 or higher are capable to perceive several planes of existance simultaneously, being capable to attack and defend from enemies localized in other dimension), Immortality (Types 1 and 3), Absorption (Assimilates any inorganic matter to heal itself), Gravity Manipulation, Invulnerability (Besides wrath and rage, Filisnogos lacks of any emotion, making it invulnerable to Pathokinesis. Can only be damaged by supernatural attacks or attacks capable to damage energy with elevated area of effect), Non-Physical Interaction, Limited Resistance to Sound Manipulation (Sounds produced by beings of gnosis 40 or higher can't be manipulated)

Attack Potency: At least Small Country level (Destroyed anything in a radius of 100 km in few hours when was still considered a "baby". Equals offensive stats than Rudraskha)

Durability: At least Small Country level, likely higher (As a damage resistant creature, is capable to resist great amount of damage and attacks from creature equaly strong as it)

Range: Up to 3 km with tentacles

Standard Equipment: The Filisnogos is capable to summon at will a giant blade within its body or the ground. This blade is one of the Pillar of Souls created by Imperium (the weakest one), having more damage than Filisnogos normal attacks and it absorb the existential essence of any creature destroyed by the blade. As any Pillar of Souls, can only be destroyed by another Pillar of Souls, or at the very least, by a being equal or superior to Gnosis 45

Intelligence: Unknown, moved by the rage of thousand of souls it does not show any sign of intelligence besides destruction

Weaknesses: Weak against water- and cold-based attacks, even if they aren't of supernatural nature. If it does not kill anything in a period of 24 hours, it goes to sleep and can't be awakened by conventional means