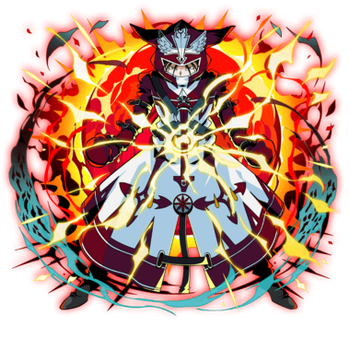 Feitan Portor (フェイタン゠ポートオ, Feitan Pōtoo) is a member of the Phantom Troupe, an infamous gang of thieves with Class A bounties. During the Chimera Ant Arc, Feitan was the interim boss for the Troupe following Chrollo's exile after defeating Zazan in a fight.

Tier: 8-A, higher with Rising Sun

Powers and Abilities: Superhuman Physical Characteristics, Nen Manipulation (Transmuter; Feitan is a powerful Nen user and can use all the basic and advanced techniques), Acrobatics, Master Hand-to-Hand Combatant, Master Swordsman, Afterimage Creation, Master of Torture (Feitan specializes in torturing, and is so good at it that Uvogin believed what a mafia member said after he was tortured by Feitan. He also tortured Owl, a member of the mafia shadow beast (here; warning - the image is graphic)

Powers and Abilities: Creation (Feitan can conjure a suit of armour), Rage Power (Feitan's rage activates Rising Sun), Statistics Amplification (Rising Sun boosts his aura output), Energy Projection and Transmutation (Transmuted his aura into a miniature sun. The more damage Feitan takes, the stronger it is. He emits the ball into the air), Fire Manipulation (Rising Sun incinerates the victim), Resistance to Fire Manipulation (Feitan's armour protects him from the effects of Rising Sun)

Attack Potency: Multi-City Block level (Comparable, if not superior to Bonolenov), higher with Rising Sun. (Rising Sun easily killed Zazan, who was completely unaffected by Feitan's Ko attack, Rising Sun is so powerful that the other Troupe members immediately ran away from it and in the past, nearly killed members who tried to see what happened. Additionally, Feitan claimed that the attack that burned Zazan wasn't that strong.)

Speed: At least High Hypersonic+, likely higher (Is one of the swiftest Phantom Troupe member. Usually shown to blitz his opponents. Restrained Gon before he could react. Escaped a car before Fun Fun Cloth took effect. Kalluto, a member of the infamous Zoldyck family, could barely perceive Feitan's fight with Zazan. Was stated to be rusty in his battle with Zazan. As the match went on, Feitan was beginning to overwhelm Zazan with his speed)

Lifting Strength: Class 100 (Ranks 5th in arm-wrestling in the Troupe, where all members are endowed with superhuman strength)

Stamina: Immensely High (As one of the fastest Troupe members, he should have endurance comparable to the likes of Hisoka and Uvogin. Feitan can fight dozens of mafia members and fought the remarkably powerful Zazan without showing any signs of exhaustion)

Intelligence: Above Average (Feitan is a highly skilled combatant and a master torturer. He is usually seen reading Trevor Brown books as a hobby)

Weaknesses: Feitan rarely fights at full strength. Pain Packer requires damage to be dealt to Feitan. Zetsu involves keeping one's aura exclusively in the body, it makes a Nen user more vulnerable to physical and Nen attacks, because one doesn't have any aura on the outside of one's body to protect oneself.

Nen: Feitan is a powerful Nen User being able to use all the basic and advanced techniques

Rising Sun
Add a photo to this gallery