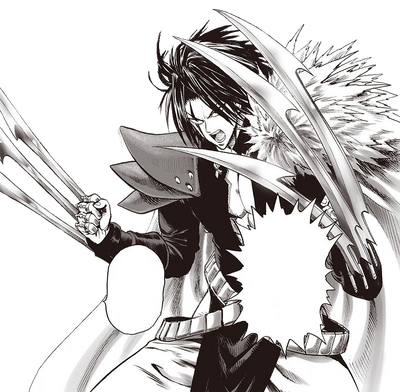 Feather is an A-Class Rank 34 hero for the Hero Association.

He is a muscular young man with a rather intricate outfit, and wields numerous retractable tekkō kagi on both his hands and feet. He is a practitioner of the "Midair Killing Arts", which is famous enough that it earned him the respect of Sweet Mask.

Attack Potency: Large Building level+ (Should be comparable to other physical fighters in the A-Class)

Speed: At least Supersonic (Should be much faster than the likes of in-training Saitama)

Retrieved from "https://vsbattles.fandom.com/wiki/Feather_(One-Punch_Man)?oldid=5638527"
Community content is available under CC-BY-SA unless otherwise noted.