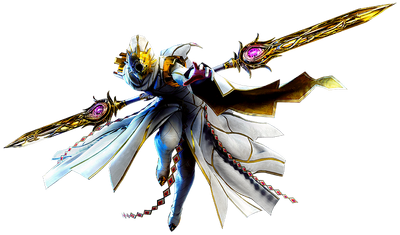 Father Balder is the main antagonist in Bayonetta and also Bayonetta's father. He, along with his lover Rosa, were responsible for the beginning of the Clan Wars, in which he was left as the only surviving Lumen Sage. He is hinted to have been the one that started the Witch Hunts before the truth of his corruption is explained in the second game. In the present day, Balder is the CEO of the Ithavoll Group and was responsible for the death of Antonio Redgrave, Luka's father. Balder possesses the Right Eye and is an overseer of history because of it.

Classification: Lumen Sage, Bearer of the Right Eye of the World

Lifting Strength: Class T (Can casually throw around skyscrapers with his telekinesis, should be comparable to Bayonetta)

Intelligence: Gifted (Experienced fighter and magic user, head of the plot to resurrect Jubileus in the first game, which worked out perfectly until Jeanne returned to free Bayonetta from the statue of Jubileus)

Weaknesses: Requires the help of an Umbra Witch (Bayonetta) to summon Omne, can be short-sighted and easily manipulated in his earlier years, is somewhat arrogant in his later years

Father Balder battle
Add a photo to this gallery