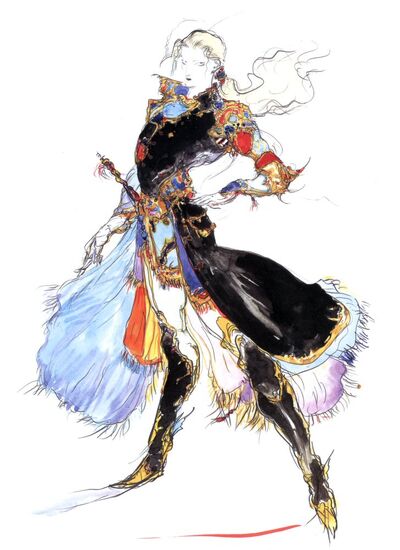 Faris Scherwiz, real name Sarisa Scherwil Tycoon, is a player character in Final Fantasy V. Faris is a pirate captain who travels with a pirate ship and its crew, accompanied by a sea-dragon named Syldra. The party first encounters Faris when they try to steal the pirate ship, which leads to their adventures as the Warriors of Light. Faris eventually lets the party use their ship, which can move without wind due to Faris' sea creature friend, Syldra, moving it. Faris is chosen by the Fire Crystal, symbolizing courage. It is revealed quickly that Faris is in fact a girl and Lenna's long lost sister Sarisa.

Faris is courageous, sometimes reckless, and determined not caring what anyone else thinks. She is initially is selfish and only joins the other Light Warriors for personal reasons rather than to save the world. She is brash, rude, and rough-spoken, and, being a pirate captain, she is a strong leader and refuses to be left out of things. She has no problem with leaping into dangerous situations. As a Warrior of Light, she represents Fire, the element of courage.

Being raised as male by pirates, Faris is defensive about her gender and even slips up in referring to herself as male or female. She can be defensive about her emotions and has a hard time expressing how she feels. She does have a caring side that comes out when she realizes she and Lenna might be connected, and she becomes protective of her. Though she never becomes sweet-spoken and polite, it is clear she is fond of her fellow Light Warriors and begins feeling a responsibility towards the world as they do. She appears in Theatrhythm Final Fantasy as a playable sub-character.

Attack Potency: At least Large Planet level, possibly Galaxy level (Has been instrumental in the defeat of beings like the various Demons of the Rift, Bahamut, Omega, Shinryu, Enuo and Tree Form Exdeath)

Durability: At least Large Planet level, possibly Galaxy level (Endured torture from the full power of one of the crystals, has tanked a Tsunami from Shinryu, and survived Giga Flares and Meteors cast by Neo Shinryu)

Range: Extended melee range with weapons, much higher with magic and summons

Standard Equipment: Varies, should at least be in possession of the Sealed Weapons

Intelligence: She is a skilled all-round type fighter, is also a leader of her band of pirates

Note: This profile is based on Faris as a Freelancer with all her powers unlocked.

Retrieved from "https://vsbattles.fandom.com/wiki/Faris_Scherwiz?oldid=5114513"
Community content is available under CC-BY-SA unless otherwise noted.