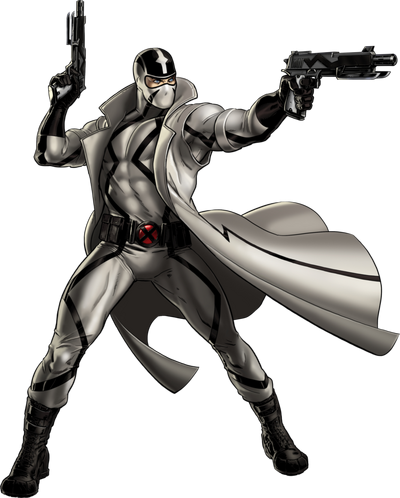 The product of a mating between his mother and a machine, Charlie-Cluster 7 was born in the World, a secret square mile of experimental micro-reality built by the military industrial complex. In the World, artificially evolved super-soldiers destined to serve mankind during the inevitable war between humans and mutants were bred and trained by the Weapon Plus Program. The World’s scientists heated up time itself until it flowed in all directions at once. Into this pliant, fast-moving substance, they introduced human test groups, whose genetic material was crudely spliced with adaptive Nano-Sentinel technology, and ran the result through half a million years of cyborg mutation in eighteen months. Charlie’s nervous system was extracted and mutated into the autonomous entity named E.V.A.

Gender: Male, has had a female avatar

Stamina: Very High (Can keep on fighting despite being heavily damaged.)

Intelligence: Gifted (Is familiar with Celestial Technology. Is an extremely skilled mercenary)

Weaknesses: Fantomex possesses a secondary, internal nervous system that he can activate to prevent negative feedback from E.V.A., but its functions are limited, allowing him to see only in black & white. Has nanites in his blood that prevent him from believing in anything larger than himself such as religion or true love

Notes: Before making any changes to this page, please read and follow the Power-scaling Rules for Marvel and DC Comics