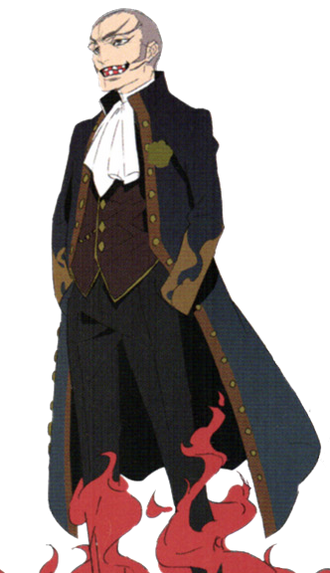 False Caster is the servant summoned by Orlando Reeve during the Snowfield Holy Grail War.

False Caster’s True Name is Alexandre Dumas pére, the famous writer of the Three Musketeers and the story of The Count of Monte Cristo. A contemporary of Hans Christian Andersen, he was also well known for revising the works of others and his nonfiction works, specifically his literary works concerning food.

Age: 68 at the time of his real life counterpart’s death

Powers and Abilities: Superhuman Physical Characteristics, Plot Manipulation, Information Manipulation, Empowerment (Of others), Statistics Amplification, Power Bestowal, and Causality Manipulation with Dictionaire de Cuisine and Musketeers’ Masquerade (Can rewrite the backstory/story of a person with Musketeers’ Masquerade to empower them, and can do the same to items to transform them into Noble Phantasms with Dictionaire de Cuisine), Telepathy, skilled hunter and cook, Extrasensory Perception and Information Analysis (With Era Observation, he can analyze the flow of the era he is in, allowing him to sense attackers like False Assassin and gather information about others, such as their secrets or nature), Limited Fate Manipulation (All servants with B-rank Luck or higher can change fate to avoid inevitable outcomes such as having their heart pierced by Gáe Bolg), Preparation and Servant Physiology

Attack Potency: Wall level (Though a weak servant not suited for direct combat, even the weakest servants are capable of feats far above the greatest athletes like easily crushing a human skull), Varies, Island level with Dictionaire de Cuisine (Though the weapons he create vary in power, they are considered to be superior to original Noble Phantasms such as the ones held by Gilgamesh and said to be capable of defeating him)

Speed: Superhuman with Massively Hypersonic reactions (As a weak author Caster with E-rank Agility, he should be comparable to Andersen)

Striking Strength: Wall Class (Despite his E-rank Strength, he is still far above any modern human)

Stamina: Virtually Tireless so long as he has a mana supply.

Range: Standard Melee Range, Tens of Kilometers with Era Observation (Observed occurrences from across the city of Snowfield)

Standard Equipment: Paper and some form of writing utensil

Intelligence: Very High (Despite his hedonistic outlook, rashness, and fondness for slang, Dumas is considered extremely dangerous due to his intelligence. Outside of being an outstanding writer, he has become skilled at gathering information both with the internet and his Era Observation skill, and is skilled enough to use the information gathered by this skill to manipulate others into giving him what he wants, though this usually amounts to food or women.)

Weaknesses: Cannot fight in spirit form. Has no legitimate combat experience, and is specialized in empowering others rather than actually fighting. Musketeers’ Masquerade can only be used a limited number of times, can only be used on an individual person once, and requires the person to be facing overwhelming odds. The power of the items he revises depends on the quality and power of the original, and he cannot revise objects that already have a rank of A.

Musketeers’ Masquerade: Musketeers, Challenge the Windmill: An Anti-Unit Noble Phantasm held by Alexandre Dumas. It is a Noble Phantasm that can only be used a limited amount of times per summon, which uses “writing/revision” to overwrite the target’s life with his own personal experiences or moments from his literary work. A support-type Noble Phantasm that can multiply the target’s power, once per person. Since it is empowering the ones who are about to face against overwhelming power, it usually only works when used on a human.

Grand Dictionaire de Cuisine: The Long Unended Epicurean Saga: False Caster’s main Noble Phantasm, it is a Noble Phantasm possessed by Alexandre Dumas based in his multiple experiences of co-authorship and revision in his works, including the posthumously released Grand Dictionnaire de cuisine (Great Dictionary of Cuisine), and the fact that he acted as the head of an inspection museum for ancient relics and other such artifacts. This changes his Caster Class Skill of Item Construction to "Item Construction (Revision)", granting Dumas the ability to increase the "Rank" of existing objects and granting them the status of pseudo-Noble Phantasms through the act of personally writing their stories.

Unlike most objects derived after from older artifacts, which degrade overtime, weapons and items created by Dumas are instead superior to their origins. Though slower and harder to mass produce than that of Unlimited Blade Works or a servant skilled in forgery, the weapons produced by it are said to be capable of overpowering Gilgamesh’s Gate of Babylon in raw power.

Territory Creation: A skill which denotes the capability to create an area for magecraft. Dumas has an E-rank in this skill, though its full effects are unknown.

Item Construction (Revision): A skill which denotes the capabilities of the creation of magical items. However, it has been modified by Grand Dictionaire de Cuisine to be specifically for revision of items instead. The potency of the revised item is dependent on the power and rank of the original, and artifacts that already hold a rank of A cannot be improved by this skill, as “their story is complete.”

Era Observation: A skill that analyzes not humans, but the flow of the era he is in and incorporates it into his writing. Though it is primarily to enhance his writing, it also functions as a powerful information gathering skill, allowing him to sense and understand the nature of Watcher, sense False Assassin before she attacked his master, and learn secrets in order to blackmail his master.

Gourmand: A skill which denotes proficiency in cooking related activities. At A-rank, Dumas is capable of fixing everything from junk food to royal court meals, as well as techniques necessary for hunting for ingredients.

Innocent Monster: A skill which is representative of a person whose legend has been twisted and corrupted after their death. As Dumas was the object of much gossip, scandals, as well as many lawsuits and plagiarism accusations, he has an E-Rank in this skill.