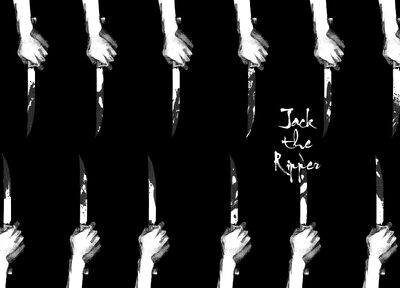 Berserker is the Berserker-class Servant summoned by Flat Escardos during the events of the Snowfield Holy Grail War of Fate/Strange Fake.

Berserker's True Name is unknown, but is publicly known as the legendary serial killer Jack the Ripper. The conglomeration of the many legends and theories about their identity, Jack seeks the Holy Grail in order to recover their original identity.

Tier: Unknown, likely at least 9-B normally, Varies from 9-C to 6-C with From Hell

Gender: Unknown, Can manifest as any gender Jack the Ripper was theorized to have been

Age: Unknown, Can manifest at any age Jack the Ripper was theorized to have been

Powers and Abilities: Superhuman Physical Characteristics, Duplication, Shapeshifting (Can take on the form of anyone or anything that has been speculated to be the true identity of Jack the Ripper as well as anyone they see), Invisibility and Stealth Mastery (Wanderer of the Misty Night grants them an equivalent rank of Presence Concealment, masking their physical presence through all the physical and magical senses of Magi and even other Servants until they make a motion to attack), Weapon Mastery (Gains a mastery of any weapon his form requires, such as a nightstick for a police officer or a knife for a butcher), Non-Corporeal (Berserker's natural form is an insubstantial state that can speak to their Master via Telepathy), Possession (Stated that if they were under any other class, they would have possessed their Master before beginning a vicious killing spree), Statistics Amplification, Flight, and Energy Projection with From Hell (Transforms into a demon that can fly and fire heat rays. Gains power based on the amount of latent fear and unease in Berserker's vicinity, rising exponentially with local population density), Berserk Mode and Rage Power, Servant Physiology

Attack Potency: Unknown, likely at least Wall level normally (Although Berserker possesses no definite form and can take the form of domestic animals, even the weakest Servant is stronger than the finest humans), Varies from Street level to Island level with From Hell (In a wasteland, Berserker is stated to be as strong as a large beast of prey, but in a city they are stated to be on par with any of the martial Servants. Easily slayed Kerberos, a Divine Beast summoned by True Archer, who was impressed enough to use Reincarnation Pandora.)

Speed: Massively Hypersonic (Can keep up with True Archer and proved a challenge to him while using From Hell), Unknown with Thousand Faces (Can manifest literally anywhere outside of someone's direct line of sight)

Stamina: Virtually tireless for as long as they have sufficient mana

Range: Extended melee range with various weapons, Several dozen kilometers with individual bodies (Their various bodies can act independently across a city "as grand as New York or Chicago" and a population of 800,000)

Standard Equipment: Varies from body to body (i.e. Policemen will have nightsticks, butchers will have knives, prostitutes may have nothing at all)

Intelligence: As the conglomeration of all of the theories surrounding Jack the Ripper's identity, Berserker has a multitude of skills from the various theories around their true persona. As such, they have the skills of policemen, soldiers, butchers, doctors, and other professions. They are exceptionally skilled at acting, subterfuge, reconnaissance, and murder due to their past deeds, playing the part of a seductive prostitute in one instant and a noble gentleman in the next. As such, it is thought that there is no compound they can't infiltrate and in fact prefers to sneak up on Masters to slaughter them before their Servants can retaliate. While using From Hell, they also possess enough ferocity and hand-to-hand combat ability to threaten True Archer, an undisputed master of various weapons, hand-to-hand combat, and even assassination, while attacking in droves.

Weaknesses: The number of bodies Berserker is able to maintain drops with their individual strength. Berserker's hold on their sanity is precariously thin at times. Berserker cannot completely mask their neutral tone when referring to themselves. They cannot fight while in Spirit Form.