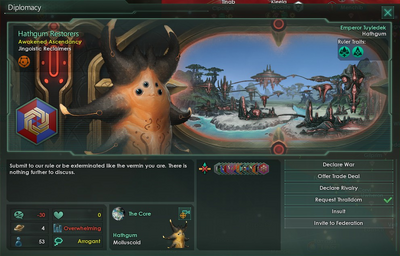 Fallen Empires are large and extremely powerful empires that have become old and stagnant with their societies grown inward over the ages.

Attack Potency: Multi-Continent level (Can easily contend with ships of end-game crises, such as that of The Contingency and Unbidden. Can completely ignore armor and bypasses shields with several weapons), possibly higher (Capable of doing this on a planet through unknown means)

Retrieved from "https://vsbattles.fandom.com/wiki/Fallen_Empire?oldid=4111127"
Community content is available under CC-BY-SA unless otherwise noted.