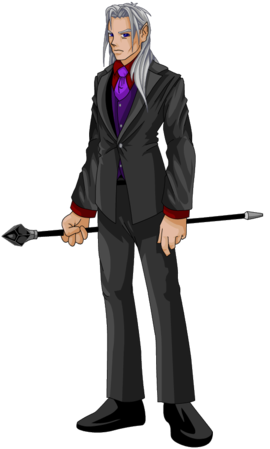 Falerin Ardendor is the Caelestian god of Evil who often manifests on Lore with Lorithia's permission as the Loremaster in Isle d'Oriens. During a confrontation with the Erebus, Falerin was split into various pieces, most of which were gathered during the Mostly Harmful War Special Mission. Two pieces still remain: the Loremaster and Ardendor who he successfully gathered back when Dhows' true form was revealed, and has now been conferred the title of Lorian Demipower of Lore: Discovery, Knowledge and Secrets. He does not generally stick around for fights, and teleports away when swords are drawn.

Powers and Abilities: Superhuman Physical Characteristics, Magic, Avatar Creation, Teleportation, Transmutation, Energy Manipulation, Portal Creation, Life Manipulation, Creation, Reality Warping (The Astral Plane is a construct created by Falerin and one of his avatars that is able to turn thoughts into reality), Alternate Future Display and minor Probability Manipulation through the Hall of Memories (Falerin is capable of altering the past and seeing the future that results from it, said changes do not affect reality but act more as a simulation), Pocket Reality Manipulation, Immortality (Type 1, 2, 3, 8, and possibly 4: After being killed by the Mysterious Stranger, Falerin's avatars continued to be kept alive and retain his consciousness by powers provided by Lore itself, avatars possess type 9), Duplication, Resurrection, Age Manipulation, Summoning, Regeneration (Low-Godly. After being destroyed by Seth Cay Dhows, Falerin's consciousness was shattered and scattered across the mortal world, despite his condition Falerin was still capable of slowly re-assembling his being), Shapeshifting, Size Manipulation, Non-Corporeal, Non-Physical Interaction, Soul Manipulation, Absorption, Elemental Manipulation, 4th Wall Awareness, Acausality (Type 1: Normally immune to the changing of past events within a timeline).

Attack Potency: Universe level+ (Created the Astral Plane and the Abode which have been described as a rather small aspect of Falerin himself), possibly higher (Reached the status of an Extra Greater Power at a certain point alongside the rest of Farpoint and Eldron, which is a position above Lorithia and The'Galin, the latter who is responsible for recreating Lore and the rest of the universe).

Speed: Nigh-Omnipresent (The Abode are avatars of Falerin that reside as two consciousnesses that are omnipresent within 36 different universes including Lore, Terra, and Caelestia, said to able to exist in multiple places at once through "colocation").

Retrieved from "https://vsbattles.fandom.com/wiki/Falerin_Ardendor?oldid=5385998"
Community content is available under CC-BY-SA unless otherwise noted.