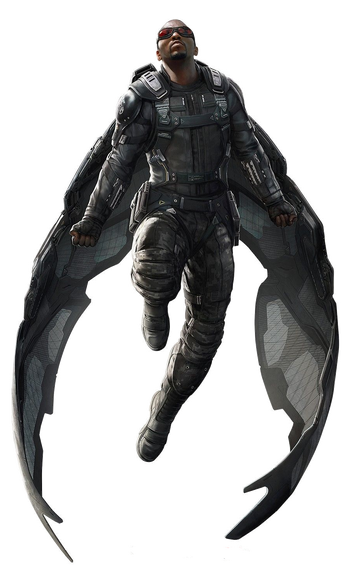 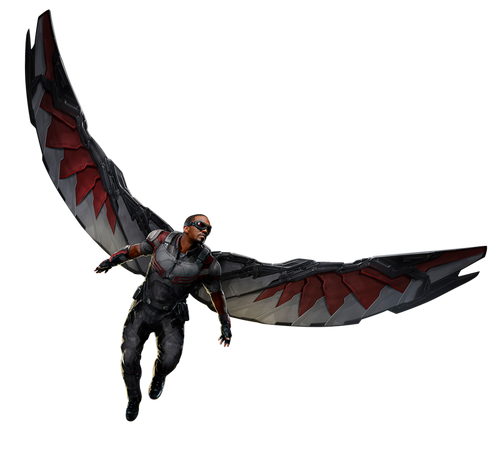 Samuel Thomas "Sam" Wilson, better known as the Falcon, was a former United States Air Force pararescue airman who left active duty when his wing-man Riley died in combat, choosing instead to begin helping any of his fellow veterans who were suffering from post-traumatic stress disorder at Veterans Affairs. During this time, Wilson met and soon became an ally of Captain America during the beginning of the HYDRA Uprising, assisting him in bringing down Alexander Pierce's schemes for Project Insight before then choosing to remain with Captain America Falcon then later joined the Avengers, and has been an active member ever since.

In 2023, a retiring Steve Rogers entrusted his vibranium shield to Wilson, choosing him to be his successor.

Tier: 9-B. 8-C with Redwing and Missiles

Attack Potency: Wall level physically (Comparable to Hawkeye. Kicked Proxima Midnight through a store front. Slammed a Chitauri Giant Dog. Can stagger Iron Man. Staggered a helicopter. Kicked Black Panther through concrete). Building level with Redwing (Can kill an Outrider by crashing into it. Can send Spider-Man flying out of a window)

Durability: Wall level (Can take the massive g-force of the EXO-7 Falcon with no problem, withstood hits that could kill a normal human. Fought against Crossbones, who can punch holes through walls. Also withstands his own dives)

Weaknesses: Will be grounded if his suit is damaged