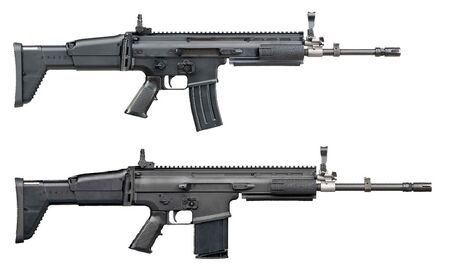 The FN SCAR (Special Operations Forces Combat Assault Rifle) is a gas-operated (short-stroke gas piston) self-loading rifle with a rotating bolt. It is constructed to be extremely modular, including barrel change to switch between calibers. The rifle was developed by Belgian manufacturer FN Herstal (FNH) for the United States Special Operations Command (SOCOM) to satisfy the requirements of the SCAR competition. This family of rifles consist of two main types. The SCAR-L, for "light," is chambered in 5.56×45mm NATO cartridge and the SCAR-H, for "heavy," is chambered in 7.62×51mm NATO. Both are available in Close Quarters Combat (CQC), Standard (STD), and Long Barrel (LB) variants.

In early 2004, United States Special Operations Command (USSOCOM) issued a solicitation for a family of Special Operations Forces Combat Assault Rifles, the so-called SCAR, designed around two different calibers but featuring high commonality of parts and identical ergonomics. The FN SCAR system completed low rate initial production testing in June 2007. After some delays, the first rifles began being issued to operational units in April 2009, and a battalion of the U.S. 75th Ranger Regiment was the first large unit deployed into combat with 600 of the rifles in 2009. The U.S. Special Operations Command later cancelled their purchase of the SCAR-L and planned to remove the rifle from their inventory by 2013. However, they will continue to purchase the SCAR-H version, and also plan to purchase 5.56 mm conversion kits for the SCAR-H, allowing it to substitute for the SCAR-L.

Speed: Supersonic to Supersonic+ (Muzzle velocity varies between 716 m/s to 870 m/s for different variants of the rifle)

Retrieved from "https://vsbattles.fandom.com/wiki/FN_SCAR?oldid=5545557"
Community content is available under CC-BY-SA unless otherwise noted.