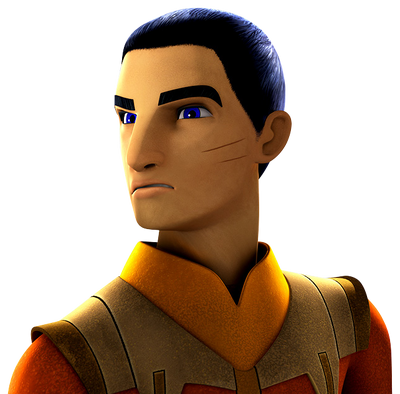 Ezra Bridger was a human male Jedi Padawan who, as an orphan on the Outer Rim planet of Lothal, became a rebel fighter and revolutionary leader in the early rebellion against the Galactic Empire. He was born to Ephraim and Mira Bridger, two outspoken opponents of the Imperial regime on Lothal. As a boy, his parents were taken prisoner by the Empire, leaving Bridger to fend for himself on the streets of Lothal. He joined the rebel crew of the Ghost five years before the Battle of Yavin and, with his Force-sensitivity having been discovered, became the apprentice of Kanan Jarrus, a Jedi who survived Order 66. Bridger's abilities with the Force grew quickly, which aided in many of the crew's efforts against the Empire.

During their rebellion on Lothal, Bridger broadcast a message of hope to the planet's citizens to tell them that his crew were rebels fighting for their freedom. This inspired other rebels across the galaxy, and the various disconnected cells of the fledgling rebellion came together to help Bridger and the Ghost crew rescue Jarrus when he had been captured by the Empire. As part of this growing rebellion, Bridger met Commander Ahsoka Tano, a former Jedi herself, from whom he learned more about the Force. He also soon learned the fate of his parents: they led a prison break, but were killed in the escape. Bridger, who had already struggled with his darker emotions, became more conflicted after his parent's death, which came to a head on the ancient Sith world of Malachor. Bridger traveled there with Jarrus and Tano to find the knowledge to defeat the Sith Lord Darth Vader and the Inquisitors who did his bidding. Bridger met the former Sith Lord Darth Maul, having dropped his "Darth" title, who attempted to seduce Bridger to the dark side. In the end, Bridger and Jarrus recovered a Sith holocron from the Sith temple and escaped, while Tano remained behind to fight Vader. Aboard the Ghost, Bridger unlocked the Sith holocron.

Tier: 9-A with his blaster. At least Low 7-C with Force powers

Classification: Human, Jedi Padawan, member of the Alliance to Restore the Republic

Attack Potency: Small Building level with his blaster (Being a heavy blaster pistol, his DL-44 should be this powerful). At least Small Town level (As still a mere Padawan, he is still below the likes of experienced Force Users such as the Inquisitor and Kanan. However, he still proved capable of moving asteroids alongside Kanan and putting up defensive battles against Force Adepts on Kanan's level thanks to his skill with Form III, which Kanan had him train with extensively as he did under his own master). Can cut characters/armours with durability on the level of that of General Grievous and the AT-AT walker with his lightsaber

Lifting Strength: Peak Human+ naturally. Can be augmented to Superhuman levels with the Force. Potentially Class M with telekinesis (Raised the Lothal Jedi temple with aid from Kanan Jarrus)

Striking Strength: At least Small Town Class with Force amplification (Managed to put up a defensive battle against an Inquisitor)

Durability: Wall level naturally (Scaling from other Force Adepts). At least Small Town level with Force amplification (Should be farther along his training and with his Force usage than Ashes of Jedi arc Luke Skywalker)

Intelligence: Fairly High. Skilled and experienced combatant. Can also be quite cunning.

Weaknesses: Can be quite immature and even hot-headed. Has also displayed some overconfidence.