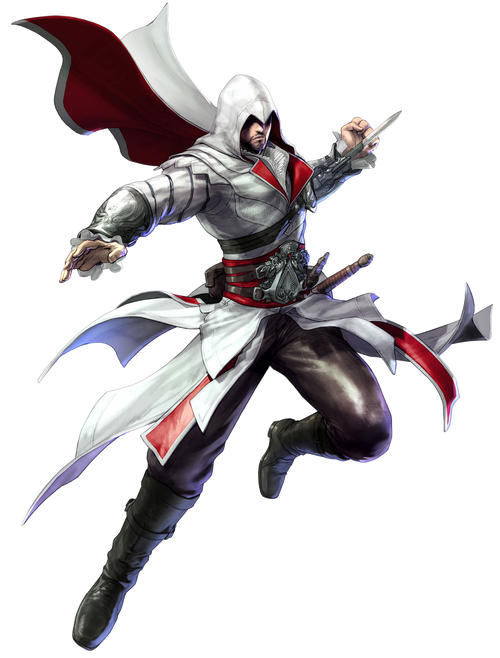 He first appeared in a leaked screenshot from a closed Namco Bandai press reveal and was later confirmed in an exclusive gametrailers trailer.

In Soulcalibur V's promotional material he is referred to as The Master Assassin.

Age: 47 (This is Ezio one year before he fights against Cesare Borgia)

Attack Potency: Mountain level (Capable of fighting on par with the likes of a True Soulcalibur-equipped Siegfried)

Speed: Superhuman with Supersonic+ combat speed and reactions (Capable of easily keeping up on par with Siegfried)

Stamina: Incredibly High (As he is essentially the same Ezio from Assassin's Creed: Brotherhood, he should possess all his feats from the game. Also capable of fighting on par with Siegfried for extended periods of time without breaking a sweat)

Intelligence: At least Genius (Just as knowledgeable as his canon counterpart)

Weaknesses: Standard human weaknesses, but has survived situations that would kill most peak-level human beings. Extremely protective of his family, and would initially retaliate violently and ruthlessly against anyone who would insult his family or his loved ones, but ultimately gave up the habit as he grew older and wiser, only retaliating when they prevented him from carrying out his duty. Will put himself in harms' way to protect innocents and the ones he loves. Became immensely ruthless and vengeful in his hunt for Rodrigo Borgia, although by the time he assassinated Girolamo Savonarola, he had come to terms with his vengeance and ultimately abandoned it for good, now focusing to kill his targets only when it was for the greater good. Maximizing the Apple's range significantly exhausts him and drains his life-force, although this is countered by the Apple's ability to heal him just as fast, due to not having had much experience using its powers (It is not known whether Ezio had this weakness removed upon fully evolving his Eagle Vision to Eagle Sense, although it is plausible as Desmond was capable of doing so with multiple trips to the Animus). Refuses to back down or give up even when the odds are against him or even when he is heavily injured. Developed an infection in the lung by 1519 due to his time in the vineyard.