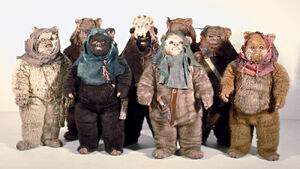 Attack Potency: At least Athlete level (One of them can easily knock out a Stormtrooper with any weapon), higher with prep (Their traps could easily destroy AT-STs)

Striking Strength: At least Athlete Class (One of them can easily knock out a Stormtrooper with any weapon)

Stamina: Peak Human (They fought against the Empire for almost an hour)

Intelligence: Pretty low due to their stage.

Weaknesses: They don't give up, they will keep fighting until the last man dies

Velociraptor (Real World) Velciraptor's profile (Ewoks had an hour of prep, battle took place on Endor, and speed was equalized.)