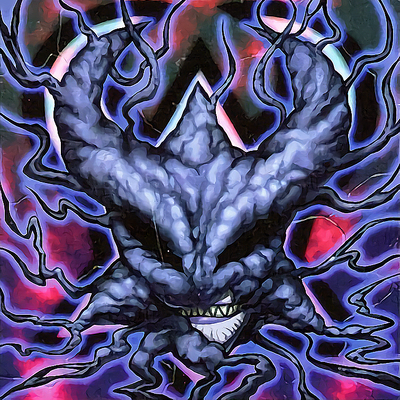 The embodiment of evil, the Evilswarm is a sickness which spread throughout the Terminal World. Though details of it’s existence are unknown, it’s first victims were Steelswarm Hercules and his brethren. Laying dormant for many years, it’s influence was rekindled accidentally by Gishki Noellia, whom it manipulated into releasing the Steelswarm. It was fully awakened by the rage felt by the Gem-Knights during the second Great War, and launched a assault on the world made by the dead of the last two wars. However, it was pushed back by the Constellar, with it’s last few vanguards, the Ice Barrier Dragons, becoming Evilswarm Kerykeion in order to combat Sophia, Goddess of Rebirth, who had awakened and desired to cleanse the world.

Powers and Abilities: Abstract Existence (Type 1. Evilswarm is the conceptual embodiment of all the wicked thoughts and evil in the world, and exists only as an abstraction), Non-Corporeal (Exists only as thoughts), Immortality (Type 1), Disease Manipulation and Empathic Manipulation (Can spread itself as evil thoughts and a sickness), Mind Manipulation, Soul Manipulation, and Body Puppetry (Those incapable of resisting its intense evil thoughts of the Evilswarm are instantly corrupted in mind, body, and soul after death, turning them into more Evilswarm), Corruption (Those who were attacked become Evilswarm themselves), Possession (Those corrupted by the Evilswarm take control of those they fight to pass on its influence. This also works on machines and the dead), Necromancy, Technology Manipulation, and Resurrection (Able to resurrect the dead as well as destroyed technology by turning them into Evilswarm), Absorption (Evilswarm grows more powerful by absorbing negative emotions, the more it is exposed to negative emotions the stronger it becomes), Fusionism (Fused the bodies of the Worms into Evilswarm Azzathoth), Dimensional Travel, Power Bestowal (Increased the strength of the Ice Barrier Dragons. Those infected can pass on the disease to others), Biological Manipulation (Mutated Steelswarm Hercules and his brethren into their current forms)

Attack Potency: Unknown (Its powers don't focus on destruction, but instead relies on widespread mind manipulation and corruption to have things fight for it)

Stamina: Limitless (Due to existing only as thoughts)

Range: Planetary, Cross-dimensional with corruption (Able to reach the Ice Barrier Dragons that were sealed in the Void Trap Hole)

Intelligence: High (A highly intelligent and manipulative force capable of causing widespread corruption and taking advantage of even the smallest opportunities to expand its influence)