VS Battles Wiki
Register
Don't have an account?
Sign In
Advertisement
in: Tier 9, Tier 9-A, Characters,
and 26 more 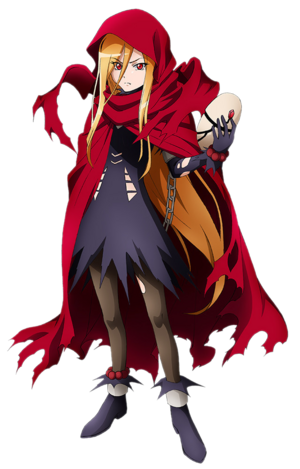 Keeno Fasris Inberun, formerly known as the legendary Vampire Lord Landfall, and currently reffered to as the adamantite-class adventurer Evileye, is a mysterious figure within the Overlord universe.

First seen working alongside a band of adventureres called the Blue Roses, her abnormal strength was shown in her ability to barely defeat one of the Pleiades Combat Maids, Entoma, and Demiurge noticing the large gap between her strength and that of her adventurer comrades. This is because she was one of the original Thirteen Heroes, legendary figures in the past of the New World. Why she had a change of heart so long ago and why she hides her vampiric nature are still left in mystery.

Powers and Abilities: Superhuman Physical Characteristics, Immortality (Types 1, 3, and 7), Enhanced Senses, Forcefield Creation, Magic, Flight, Teleportation, Acid Manipulation, Lifeforce Absorption (Can imbue all of her attacks with Negative Energy that drains her target's lifeforce), Mind Manipulation, Necromancy, Earth and Sand Manipulation, Status Effect Inducement (Paralysis, Blindness, Silence and Daze with Sand Field: All. Can inflict negative status effects with her attacks when she overloads herself with Negative Energy, though the effects are unknown), Crystal Creation and Manipulation, Invisibility, Limited Poison Manipulation (Specifically targets insects with Vermin Bane), Petrification, Non-Physical Interaction (Can cause damage to intangible and incorporeal targets with magic), Gravity Manipulation, Regeneration (At least High-Low, likely Low-Mid), Resistance Negation (Can use Resist Weakening to weaken a target's resistance. Can use the metamagic Penetrate Magic, which can allow one to penetrate resistances), Power Mimicry (Evileye's Talent allows her to copy any one spell she has seen or been targeted by and use it once), Self-Sustenance (Types 1, 2 and 3), Resistance to Death Manipulation, Soul Manipulation (Should be unaffected by Soul Eaters, which absorb souls), Mind Manipulation (Including mind absorption), Fear Manipulation (Should resist the Iris Tyrannus Basileus's roar, which induces fear so intense it kills those who hear it[1]), Telepathy (Doppelgangers cannot read her surface thoughts), Ice Manipulation, Energy Absorption, Necromancy, Poison Manipulation, Disease Manipulation, Sleep Manipulation, and Paralysis Inducement

Speed: At least Supersonic (Faster than characters like Brain Unglaus), likely Supersonic+ (Able to react to attacks from Pleiades members, who may or may not be comparable to Albedo in speed)

Lifting Strength: Likely Class 25 (Although weaker than the Pleiades, she should likely be comparable to CZ2128 Delta)

Striking Strength: Small Building Class (As a vampire, her physical strength is greatly enhanced, and should be at least on par with humans like Gazef Stronoff)

Stamina: Like Shalltear, she is physically tireless as an undead. Can fight against several members of Pleiades for an extended period of time without expending all of her mana, though she eventually would have been overwhelmed if the fight continued.

Range: Hundreds of meters to several kilometers with magic

Standard Equipment: Her mask, as well as a ring that conceals her status as a vampire

Intelligence: Above Average, likely far higher (Extensively knowledgeable in regards to magic, and has centuries of experience in combat. Able to conceal her nature as a vampire to other Adamantine adventurers, and even her level of strength to a certain degree)

Weaknesses: Like other undead, she is weak to the Fire and Holy elements, and due to her vampirism she also suffers from reduced stats in daylight. She typically makes her best efforts to conceal her vampirism and might not opt to use her vampiric abilities even when in a pinch. Additionally, as Evileye is an Earth Elementalist, magic and skills suited to countering the earth element will have increased effects against her. Her Talent is unusable, as it stored and copied the soul absorbing spell Cure Elim used, which she unconsciously used to absorb the souls of those around her. Maintaining this spell is what allowed her to become a vampire, and if it were to be released or dispelled, she will lose her intelligence and become a mindless zombie.