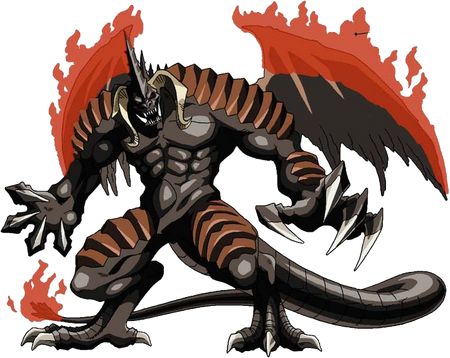 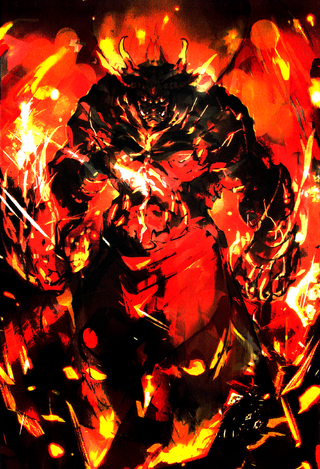 Evil Lord Wrath is an Evil Lord who serves as one of Demiurge's personal bodyguards on the 7th floor of the Great Tomb of Nazarick. Although Wrath spawns in Nazarick, Demiurge can also summon one directly, though Wraths created this way are temporary and can't use summoning themselves. Wrath is roughly level 84, which allowed him to hold up against Ainz Ooal Gown for a while in their mock battle with the help of some enhanced doppelgangers, though the Sorcerer King still won out in the end.

Wrath served a prominent role in Jaldabaoth's invasion of the Holy Kingdom, pretending to be Jaldabaoth's "true form" in order to strike fear into the country.

Attack Potency: City level (With the help of a few doppelgangers, was able to give Ainz a solid fight. Explicitly weaker than Ainz, but still powerful enough to be considered as troublesome to him)

Speed: Supersonic+ (Kept up with Ainz and was able to give chase)

Lifting Strength: At most Class M (Though classed as a warrior, is weaker than a Floor Guardian)

Intelligence: At least Average (skilled in combat, and was able to play the role of Jaldabaoth's true form)

Weaknesses: Holy element attacks. Although Wrath possesses many spells for a warrior class, it has low spellcasting abilities for its level. 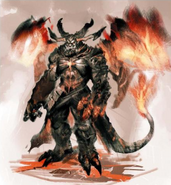