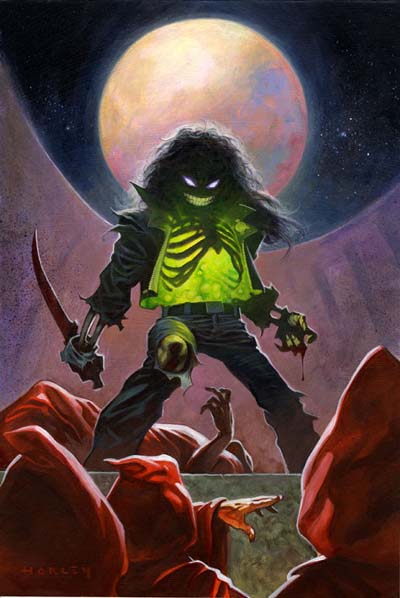 Powers and Abilities: Superhuman Physical Characteristics, Immortality (Type 3, 6 and 7), Necromancy, Magic, Energy Manipulation, Energy Projection, Telepathy, Possession, Regeneration (Mid-High), Dream Manipulation (within his own dreams), Precognition, Resurrection, Non-Corporeal (High-end; was able to survive the complete erasure and restructure of the universe while in his disembodied form), Reactive Power Level (During his fight with Cremator, his power began to rise in response to the latter's own), Adaptation and Reactive Evolution (During the aforementioned fight with Cremator, his Energy Arcane evolved, granting him Energy Projection. After a telepathic attack from Purgatory, his telepathic powers evolved, allowing him to affect the living with his telepathy), Minor Fate Manipulation, Mind Manipulation, Resistance to pain, Resistance to Telepathy and Mind Manipulation (Is the nexus of the Dead Mind; those who enter his consciousness have their own minds assaulted by countless undead and dragged into his fearscape. Views his own mind as a separate reality in which his dreams and imagination manifest themselves, and can fight enemies inside of his mind as well as summon other beings to his aid while within it. Managed to interrupt Purgatori while she was reading his memories. Stopped Homicide from mind-controlling one of his undead, then proceeded to mentally overpower him.), Smiley has Invulnerability

Attack Potency: Small Building level (Punched through a steel door with ease. Fought against Cremator, who was strong enough to hurt him. Vaporized a group of demons with a single energy wave. Tore his way out of a massive three-headed dog), Some abilities like Mind Manipulation may bypass durability.

Speed: Supersonic+ (Reacted to and dodged a shot from a turret cannon)

Lifting Strength: Class K (Easily uprooted a tree and threw it as a projectile. Ripped a steel security door off its hinges with minimal effort. Easily ripped out a human spine, which would require 102 tons-force)

Durability: Small Building level (Withstood an oil tanker explosion at point-blank range. Survived flying a helicopter into a building) Regeneration, non-corporeality, possession/resurrection and numerous forms of immortality make him extremely difficult to kill. (After the Armageddon event storyline, it was revealed that the complete erasure of the universe was not enough to kill him and Smiley for good, and after said universe was rebuilt from nothing, he was able to resurrect himself through the corpse of a death row inmate who pricked himself on Smiley's pin), Unknown for Smiley (Nothing in his universe has been able to harm Smiley directly)

Stamina: Extremely high. Completely unfazed by most injuries, including bullet wounds, blunt-force trauma, limb-loss, electrocution, being lit on fire, and having his skin and flesh melted off by acid.

Range: Standard melee range. Much higher with energy blasts. At least thousands of kilometers with telepathy and mind control. (Was able to control the entirety of Washington, D.C., and later held control over every undead being in the eastern seaboard of the United States.)

Standard Equipment: Smiley the Psychotic Button. Often travels with numerous undead by his side.

Intelligence: Gifted. Has gained large amounts of knowledge from his zombies. Possesses a noticeable level of cunning that has allowed him to formulate numerous strategies that worked to his benefit. Has led a large number of successful invasions, outmaneuvered the military on numerous occasions, and tricked the Court Jester of Hell.

Weaknesses: Insane. Complete bodily destruction takes longer for him to regenerate from. If separated from Smiley, he will eventually weaken. Has poor control over his manipulation of fate, and as such it is not something he can effectively use during combat. The traumatic events of his past were at one point something he was vulnerable to, though this was remedied towards the final leg of his series. When his physical form is destroyed, his consciousness seems to operate on pure instinct until it is able to find another body to inhabit. When inhabiting another person's mind, he is incapable of restoring his physical form until they die, though he is capable of driving them insane beforehand.

Note: This profile is based on the Evil Ernie character as he appeared within the original Chaos Comics universe. It does not cover any of the character's subsequent appearances within works published by later companies.