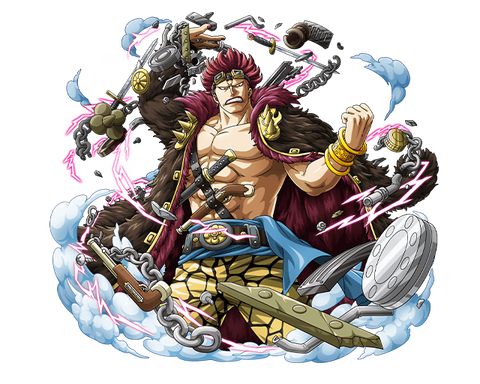 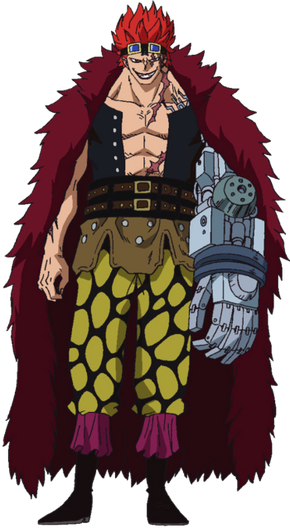 Eustass "Captain" Kid is a notorious pirate from South Blue and the captain of the Kid Pirates. He is one of the Eleven Supernovas who are all renowned pirates on Sabaody Archipelago, whose individual bounties are greater than 100,000,000 Beli when the Straw Hat Pirates arrived. One of the reasons his bounty was higher than Luffy's when they arrived at the Archipelago was a result of him and his crew causing huge numbers of civilian casualties in the course of their activities. He's known for his violent personality, though he's also knowledgeable in the ways the world works and when to step back.

Like Luffy, he aims to become Pirate King, and is infamous for leaving behind a trail of bodies of those who mocked him for it. He says that he possesses the determination to achieve the impossible, which is necessary if one is to succeed in the New World. His currently unnamed Devil Fruit power grants him power over magnetism.

After the time skip, he was first shown watching the black market, with a new metallic arm. It was revealed that he lost the original limb to a member of the Red Hair Pirates. Some time later, he strikes an alliance with Scratchmen Apoo and Basil Hawkins to strike down Shanks. Unfortunately, before he could even get anywhere on that, they were attacked by Kaido and resoundly trashed, leaving him as a prisoner.

He makes his big return in the Wano Arc, reuniting with Luffy when the latter ends up in prison. From the start, it is clear that their team-up will not be a smooth one.

Powers and Abilities: Superhuman Physical Characteristics, Magnetism Manipulation (Can attract and repel metal at will), Weapon Mastery, Conqueror's Haki user (His proficiency with it it's unknown), Cyborgization (Has a metalic arm), Body Control, Regeneration (Low; Was able to heal his body from serious injuries by just working, eating and sleeping), Limited Levitation (Requires a magnetic object for him to float on)

Attack Potency: Likely Mountain level (Should be superior to Killer who he is the captain of and fought with against Kaido, was shown comparable to Luffy in strength during their time in Udon)

Stamina: Very high (Despite being badly injured after Kaido defeated him, Kid was able to do slave work on Udon's prison while being cuffed with Seastone and missing an arm. And all of that was done while he recovered his strength to escape from Udon later, instead of getting weaker)

Range: Tens of meters, potentially higher (Gathered metal objects from the Slave House when he was outside of it)

Standard Equipment: None notable, however, he can use his powers to gain any magnetic object and use it as a weapon

Intelligence: Accomplished and battle hardened fighter, doesn't seem to be that intelligent outside the battlefield (evident when he asked Killer what the Ox Bell at Marineford was)

Weaknesses: Standard Devil Fruit users weaknesses. The main weakness of the fruit seems to be its dependence on the surrounding environment, which must contain metal in order for the fruit's powers to be used. He's a bit reckless and gets easily provoked.

Eustass Kid has an unnamed Devil Fruit revolving around magnetism.

Note: This profile covers only the feats done until the Wano arc, skipping the Pre-Timeskip events due to the lack of feats Kid had at the time.