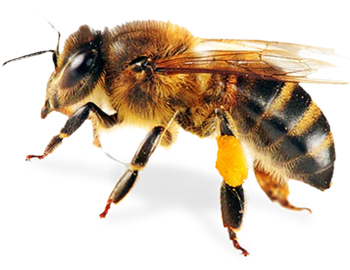 The European honeybee (Apis mellifera) is a species of honeybee native to the Old World, but has since spread to every continent barring Antarctica due to human introduction. They are eusocial animals that work in colonies using their inner electromagnetic fields to gather pollen from flowers, storing it in the hive. Female worker bees are known to forage for pollen and defend the hive, while the males, called "drones", exist solely to mate with the queen and die off shortly after. They are known for being pollinators, one of the first domesticated insects, and their ability to leave their stingers in an attacker's body as it injects venom.

Gender: Usually female, males do not sting and only exist to mate with the queen

Powers and Abilities: Small Size (Type 2), Flight, Surface Scaling, Enhanced Senses (Can see into the ultraviolet spectrum) Can sting opponents and inject venom into them, Has its own electromagnetic field that it can use to tap into the electronic fields of the earth, allowing it to tell where "North" is, as well as the ability to predict thunderstorms by sensing the static within the air that precedes said storms, can raise their body temperatures to survive the winter, which can also be used defensively when in groups, Natural Weaponry (Possess stingers)

Attack Potency: Below Average Human level (It has been estimated that it requires 1100 stings to be lethal to humans)

Lifting Strength: Below Average Human (Can lift 122 times its weight, can fly while carrying its whole body weight in pollen)

Durability: Below Average Human level (Can easily be killed by humans, but are tough for their size). Due to its small size, it can survive blunt force from much larger sources of damage.

Stamina: High (Can travel up to 6 miles at 15 mph, estimated to be capable of traveling 40 miles on a belly full of honey)

Intelligence: Animalistic (Can memorize locations and communicate via "dancing", which is known as one of the most complex languages in the animal kingdom, experiments show that bees can find their way back home from 8 miles away.)

Weaknesses: Cannot swim, easily weighed down by water, can be killed easily by humans, they die shortly after stinging, extremely hypersensitive to the extent that electrically charged particles mess with its navigation

Mr. Burns (The Simpsons) Burn’s Profile (The Bee was bloodlusted, Speed was equal)