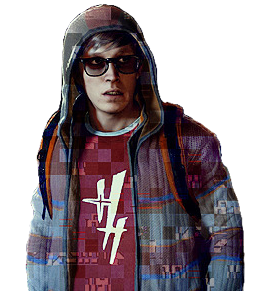 Eugene Sims was once a nerdy high-school freshman, and the son of a U.S. Congresswoman from Delaware. He was constantly bullied for his intelligence, appearance, and anti-social personality, and was neglected by his mom in favor of her work. As a result, he played video games all the time in order to escape the harshness of his life. However, pushed around too many times, he lashes out at those who mocked him, and discovers that he is a Conduit that is capable of manipulating hard-light energy and particles, aka the power of Video Manipulation. Immediately he was arrested by DUP leader Augustine, who would perform torturous experiments on him for the next seven years.

He is part of the three conduits that escaped the military vehicle's crash that ended up on Seattle. He's a major character in InFAMOUS: Second Son, assisting Delsin in his goals to take down the Department of Unified Protection.

Age: 19-21 (Was in middle school or a high school freshman when he was arrested six years ago. Is referred to by Delsin and Fetch as a "Teen")

Superhuman Physical Characteristics, Skilled Hand to Hand Combatant, Enhanced Senses, Aura, Rage Power (Gains power when fueled with Rage. His power grew so strong when he was angered he lost control of them), Healing, Statistics Amplification, Regeneration (Low-Mid, should scale to Forced Conduits, who can regrow limbs), Weapon Mastery, Weapon Creation, Longevity, Immortality (Type 3), Video Manipulation, Fire Manipulation, Light Manipulation, Technology Manipulation, Intangibility (Can turn into pure video particles), Telekinesis (Telekinetically moved the platforms in his pocket dimension), Invisibility, Teleportation (Can teleport between his pocket dimension and reality with ease, and instantly teleported to where Delsin was), Forcefield Creation (His angels can cast forcefields onto him that can easily shrug off attacks from Delsin), Duplication (Can create hard light clones of himself. Separated into dozens of smaller angels during his fight with Delsin), Transformation and Shapeshifting (Into He Who Dwells), Summoning (Can summon endless legions of angels and demons to fight for him), Flight, Pocket Reality Manipulation (Can create pocket realities large enough to contain large castles and vast mountain ranges, and is capable of warping reality inside them), Limited Reality Warping (Inside pocket dimensions), BFR and Sealing (Can banish enemies to his pocket realities, where they cannot normally escape unless he allows them to), Possibly Matter Manipulation (Macro Quantum. Should be able to destroy enemies on a macro-quantum level leaving them as nothing but subatomic particles in a similar fashion to Delsin using his powers. Should also be able to turn matter into energy and absorb it, or turn it into another type of matter or energy such as fire and light. Can create objects such as swords out of thin air), Afterimage Creation (Can leave after-images of himself behind to confuse opponents), Homing Attack (With Bloodthirsty Blades), Portal Creation (Can create portals to his pocket dimensions, most notably through televisions), Durability Negation, Attack Reflection, Limited Reactive Evolution (Conduits gain new powers and abilities by stressing their powers in different ways. In moments of extreme distress, their bodies will develop new powers to best aid the situation), Accelerated Development (Training, Battle; Physical Stats, Abilities), Large Size (Type 1)

Attack Potency: At least Large Mountain level+, likely far higher (Comparable to Delsin and Abigail, fought and overwhelmed the former despite holding back. Can create a pocket dimension nearly five kilometers in size)

Speed: FTL (Can keep up with Delsin Rowe, easily dodging his light beams from close range. And can travel and move at the speed of radio waves)

Durability: At least Large Mountain level+, likely far higher (Can take multiple hits from Delsin despite holding back during their fight. Survived the destruction of Augustine's island fortress in his human form). Higher with Forcefields

Standard Equipment: A cell phone and a laptop to utilize his video powers. Several hard-light angel swords for combat.

Intelligence: Genius. Had a high-college level intellect even in his early teens. Can easily hack into the DUP and highly-classified government databases. Created a homemade phone app that can track encrypted military communication signals. Set up a secret lair that was completely invisible to the outside world. Can create vast, complex, and highly-detailed pocket realities. Is likely skilled in strategy as a gamer, and likely received training in Curdun Cay.

Weaknesses: Extremely anti-social and shy. He would often send his angels and demons on missions so that he wouldn't have to go in public. After meeting Delsin, he has started to fight on his own, relying less on his minions, though as a result, he has less direct combat experience than most.

He Who Dwells firing a beam 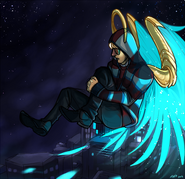 Teen Angel
Add a photo to this gallery