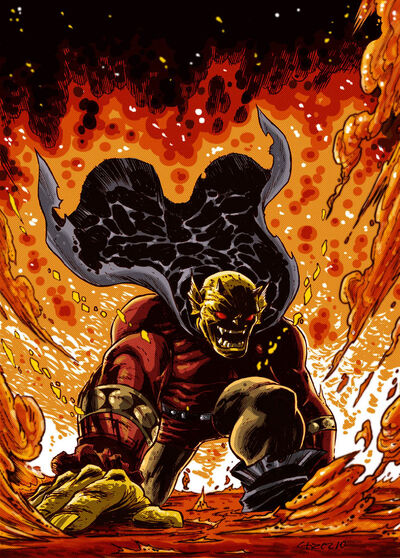 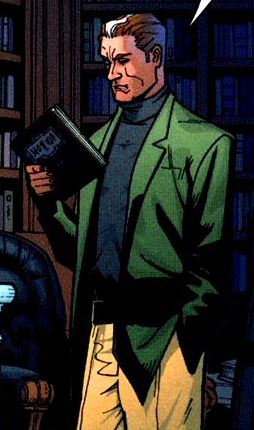 Jason Blood is a world-renowned expert on the occult and demonology. He was once naught but a regular peasant of the 6th century, however all that would change when the wizard Merlin chose him to bind the demon Etrigan inside of his soul. Thanks to the merging of the two personalities, Jason went temporarily insane, slaughtering his family and eventually, through transforming into Etrigan himself, his entire village.

Throughout the centuries, following the bloodlust of his literal inner demon, Jason gathered a great variety of fortunes, and following several cases of memory loss throughout the year's thanks to various mystical adventures, he has set up shop in Gotham City to continue his line of work.

Classification: Human cursed to turn into a mystical demon

Attack Potency: Solar System level (Toyed with Lobo. Easily subdued a demon who nearly killed Wonder Woman. Punched Superman to the Moon). Hellfire bypasses durability (He damaged the Dream Catcher with his hellfire, which was formed from the dreams and nightmares of the universe).

Speed: Massively FTL+ (Can keep up with Superman)

Lifting Strength: Likely Multi-Stellar (He has consistently been shown to be comparable in brute strength to heavy-hitters such as Superman)

Striking Strength: Solar System Class (Can harm the likes of Superman and Lobo with his blows)

Durability: Solar System level (Has taken hits from the likes of Wonder Woman, Superman, and Lobo)

Intelligence: Very high (An ancient warrior with centuries, and in the case of Etrigan, thousands of years of combat experience. Greatly knowledgeable in the occult and the supernatural.)