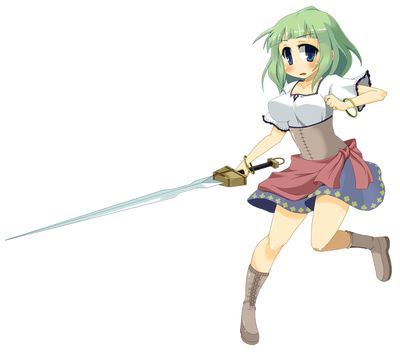 Etielle is a Playable Character of Wonderful World. A Rookie Knight of the Eimeru Knights. Somewhat self-assured, thoughtful, intense, misunderstanding and rushing often cause trouble, but a dedicated hard worker. Initially the daughter of a lord of a rural town who lived himself freely. However, the house is not wealthy, seeing parents who appear tired at one time, begin thinking what she can do. After that, she will raise her name as a noble family even if she names a few, and aim for a knight who wants to make her life easier. The sword's arms are immature. It takes time to develop magical power, so she can not fight at full power quickly, rough magical control, many wasteful consumption, etc. Although it is still under development, it is growing with eagerness to study.

Powers and Abilities: Superhuman Physical Characteristics, Ice/Cold Manipulation (Can freeze the air around her at a cost of some Energy Meter. Speed varies on movement.), Fencing Mastery (Huge feat for a Knight in-training.), Sharpness Manipulation

Silver Fang: As a Fencing sword, it is capable of getting colder, and as such, more powerful. Her silver Fang's strikes are as cold as ice.  Despite its fencing properties, it can also slash.  It is hard for the user to handle though...

Intelligence: Increasingly High (As a Rookie Knight, she is constantly learning how to fight, and is improving on her Fencing.)

Weaknesses: Still has a lot to learn about the art of War, while her sword is an excellent alternative to the Rapier, it is incredibly fragile, and hard to repair, getting at MAX Gauge is very risky as if the opponent blocks, they'll just get their Counter Gauge back VERY quickly, careless.

Feats: As the highest of her land, she seems to know politics, and etiquette, Despite being a mere Protégé, she impressed Ryuza in battle more than once, Just by her Cold Air Gauge alone, she can do a lot of damage the higher it goes...

As you Hold the O Button, Energy will slowly drain up until Bar 4/4, which is the MAX the gauge can go, is reached. It can be let go at any time. Doing this increases the freezing temperature in the air, allowing for both Finish Skills to be unlocked. Moving back raises the gauge slowly, Standing increases the gauge a little faster, and moving forward increases the gauge a lot (But leaves Etielle wide open to close range assault.). Checkpoints at specific Energy Percentages include: Lv1: 20%, Lv2: 30%, Lv3: 45%, & Max: 55%

Retrieved from "https://vsbattles.fandom.com/wiki/Etielle_(Wonderful_World)?oldid=4111002"
Community content is available under CC-BY-SA unless otherwise noted.