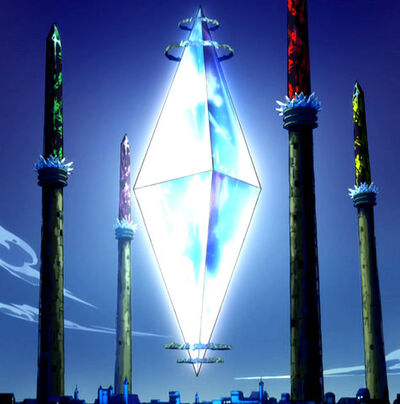 The Satellite Square: Etherion (衛星魔法陣・エーテリオン Eisei Mahōjin : Ēterion), best known as Etherion, is an extremely powerful Magic Weapon controlled by the Magic Council. After the Magic Council's complete destruction at the hands of Tartaros, Etherion has been completely neutralized. Etherion, once successfully prepared, fires an extremely large, destructive beam of Magic upon the desired location (said Magic contains Fire Magic, among other elements), that completely obliterates the target area, leaving only dust behind.

Attack Potency: Continent level (It's stated several times that Etherion can destroy an entire country in one shot. This should make it capable of destroying Fiore, which is one of the smallest countries on the planet)

Speed: Unknown (Has no speed feats)

Durability: Unknown (Has no durability feats)

Weaknesses: Requires time and staff to set it up.