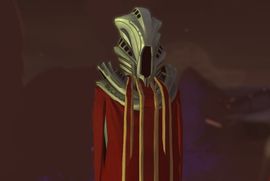 The Ethereals are incredibly powerful psychic creatures in the XCOM universe and act as commanders of the alien armies. Their overall goal is to uplift species that are capable of utilising the power of psionics, to combat unknown threat beyond even the Ethereals themselves, that is approaching.

Tier: 8-C with psionic lance, other abilities vary from 9-C to at least 8-B

Attack Potency: Building level with psionic lance, other abilities vary from Street level to at least City Block level (A psionic rift can easily kill a Sectopod because of it being a machine).

Speed: Likely Athletic Human (Ethereals keep up with XCOM soldiers, which are comparable to Navy SEALS) with Hypersonic reactions

Lifting Strength: Unknown, but likely Above Average Human, Unknown with psionics (Maintains similar strength to a Muton, which is about the size of a small car)

Durability: At least Building level (It has survived shots that would easily shatter a wall)

Range: Estimated 150m at peak with psionics (Telepathically spoke with players from the front of their spacecraft)

Weaknesses: Supposedly physically weak, although they use psionics to enhance their physical capabilities to the point of beyond their grunts (which can lift cars); while mentally strong they are not invincible and can be overcome by superior mental beings.

Retrieved from "https://vsbattles.fandom.com/wiki/Ethereal?oldid=4111001"
Community content is available under CC-BY-SA unless otherwise noted.