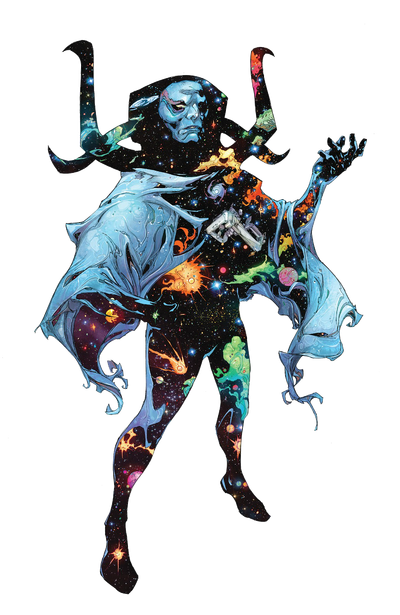 Eternity is a character from Marvel Comics. Having come to be at the beginning of Creation, Eternity is the Abstract Embodiment of Time, and the collective consciousness of all living beings. Alongside his "sister" Infinity, the Abstract Embodiment of Space, he is the "physical" manifestation of the Multiverse itself, representing both Time and Space, and collectively All there Is. Alongside Infinity, Eternity has "spawned" various lesser Abstract Entities that represent essential concepts of their own, such as Empathy, Eulogy, Expediency, Entropy, Epiphany, Enmity, and Eon.

Though there exists one complete, greater Eternity for the whole of existence on every plane and level, every universe, parallel realm and dimension containing its own Space-Time Continuum possesses its own sliver of Eternity. Said lesser shards of Eternity are often called "Manifestation-Bodies".

Upon the destruction of the multiverse at the hands of the Beyonders, reality was reborn and Eternity subsequently reemerged as the most powerful abstract in the new Cosmic Hierarchy, now embodying both time and space.

Name: Eternity, The Sentience of the Universe, Adam Qadmon

Age: Inapplicable, as old as Creation

Attack Potency: Multiverse level+ (Superior to the likes of the In-Betweener and the strongest Celestials), possibly Low Complex Multiverse level (After merging with Eternity and becoming “one-with-all,” Doctor Strange was stated to feel in many more dimensions than the usual four. Created the Eternity-Mask, which allows the wearer to view space-time as a narrative. Should be comparable to Dormammu and superior to Nightmare) | Low Outerverse level (He embodies the totality of existence, on all planes and levels of Creation. The Marvel Multiverse has been shown to contain infinite Higher-Dimensions many times) | Outerverse level (Upon being reborn as the Eighth Multiverse, Eternity ascended to the very top of the Cosmic Hierarchy, with all entities from the former hierarchy, even The Living Tribunal, being merely inner workings inside him. Encompasses the Superflow, the highest level of existence which contains the true forms of all concepts and where dreams and imagination merge into one, and the Neutral Zone, which is completely beyond and outside even the Superflow and was described as the white space surrounding all there is in creation. Encompasses the Far Shore, which was described as a void of nonexistence beyond all levels of space, time, life and death on a multiversal scale)

Standard Equipment: Inapplicable. Technically has access to all equipment contained within himself

Retrieved from "https://vsbattles.fandom.com/wiki/Eternity?oldid=7015952"
Community content is available under CC-BY-SA unless otherwise noted.