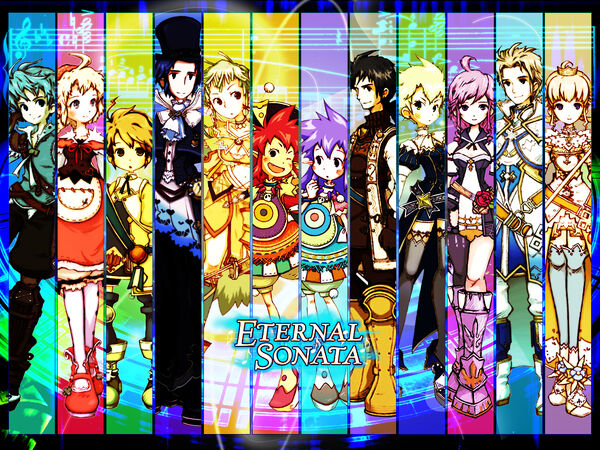 Eternal Sonata (トラスティベル 〜ショパンの夢〜Torasuti Beru ~Shopan no Yume~?, Trusty Bell: Chopin's Dream) is an original role-playing video game created by Tri-Crescendo. The Xbox 360 version of the game was released on June 14, 2007 in Japan, September 17, 2007 in North America, and October 19, 2007 in Europe. The game was also released on the PlayStation 3 with additional content as Trusty Bell: Chopin's Dream - Reprise (トラスティベル 〜ショパンの夢〜 ルプリーズ Torasuti Beru ~Shopan no Yume~ Rupurīzu) on September 18, 2008 in Japan. It was released under the original name Eternal Sonata in the United States on October 21, 2008 and in Europe on February 13, 2009.

The game is centered on the Polish romantic pianist and composer Frédéric François Chopin, who died of pulmonary tuberculosis at the age of 39. The story envisions a strange fictional world dreamed by Chopin during his last hours that is influenced by Chopin's life and music, and in which he himself is a playable character, among others. The game features a selection of Chopin's compositions played by pianist Stanislav Bunin, though the original compositions were composed and arranged by Motoi Sakuraba. It is notable for its use of classical piano pieces, educational cutscenes featuring real paintings and photographs (in contrast to the cel-shading graphics of the game) and lush landscape design.

You also have a young girl called Polka, with an uncanny resemblance to Frédéric's dead little sister, is one of the inhabitants of this otherworld. As someone who has developed magical powers (which is feared as a symptom of impending death), she is shunned by the world and lives a lonely life selling herbal medicine to a nearby village. When the empire introduces a mysterious new wonder drug that threatens what little business she gets, Polka begins an epic journey across the land to meet with the Count in person and plead her case to him.

Frédéric, believing that this dreamworld is a form of purgatory for his soul, joins Polka on her quest so that he may see the dream to its conclusion and pass peacefully onto the afterlife. But as he continues forth, he is given more and more reason to doubt that initial conclusion. Is Polka just a conjuration of his dying mind, or is she a real person living in an alternate universe that Frédéric has somehow tapped into? And if he truly is the cosmic keystone of this world, then what will happen when Frédéric finally breathes his last?

The game's battle system centers on musical elements and character-unique special attacks that reflects the latest influences in RPG design at the time it was created. Your character is given a set interval of time with which to move or attack, and the special moves available to your character depend on whether they're standing in light or shadow. This Light and darkness mechanic plays a part in the appearance and abilities of enemies on the battlefield, as well as the types of Special Attacks that may be used. Some environments have moving clouds and the like, making it a challenge to keep in a location where your heals can go off. It is possible to block, counter, and build up a chain called the Harmony Gauge in order to boost the power of your special attacks.

The RPG gameplay is accompanied by both original and arranged pieces by the virtuoso composer, and the action is occasionally interspersed with sequences that relates the events to the very real drama of the historic Chopin. An encounter with an unbeatable swordsman in a rain-soaked jungle reflects Chopin's near-fatal bout of tuberculosis on Mallorca during the rainy season. Escaping from the castle dungeons with the aid of a revolutionary group parallels Chopin leaving his native Poland mere days before the November Uprising throws the country into chaos, and so forth.

The game was first released for the Xbox 360 in 2007, then for the PS3 (with added features and a somewhat altered plot) in 2008. The PS3 adaptation includes two characters upgraded to playable status, new dungeons and character costumes and a number of significant additions and improvements to the game's story and script. On the downside, though, while the Xbox 360 version includes Achievements, the PS3 one does not support Trophies, as it was a launch title for the PS3 and was apparently created before the PlayStation Network and Trophies were conceived of.

There is also a manga adaptation of the game. However, it is only 10 chapters long and changes many aspects of the story drastically.

Magic in the World of Eternal Sonata is a somewhat nebulously defined ability that allows people to manipulate reality and use skills in a manner that generally would not be possible according to normal physical laws. Only those who have a fatal illness are able to use magic, though not everyone that is fatally ill possesses the skill. People who use magic emit a glow when casting a spell. Although characters that use Special Attacks doesn't count as magic.

Polka, is able to use magic for healing. She has been shunned by others, who believe her illness to be contagious, but finds support in the other playable characters who join in her journey, as well as the unconditional love of her mother, Solfege. Frédéric François Chopin states that he is able to use any and all kinds of magic, though when he is unable to read Polka's thoughts, she incorrectly concludes that he cannot use magic.

There is a Magic Researcher in Baroque Castle who has long been studying magic, though he hasn't made much progress due to a lack of test subjects and available data. Despite this, he has been able to draw certain conclusions, such as that only a certain illness or set of illnesses will lead to development of magic powers, and that magical ability may be much more common than believed, since nobody wants to admit that they have a fatal illness that people believe to be contagious.

Mineral powder, a drug developed from minerals mined at Mt. Rock, supposedly acts as a cure-all for all illnesses, but secretly grants magic powers to the user if used over a long period of time, while also inflicting the fatal illness. As mineral powder is widely distributed tax-free in the region of Forte, and is also addictive, nearly all who begin taking it eventually develop magical abilities and then succumb to the illness, becoming Maledictors. This is part of a scheme by Count Waltz to create an unstoppable army, though the fast rate at which magic users die has led him to seek the means to create a more potent form of the mineral powder. The mineral stones used to make the powder contain trace amounts of a substance called magitone, which is a power source for using magic. Humans, however, can't handle the pressure of large amounts of magitone, hence the reason why those who consume the mineral powder eventually go insane.

An astra is a jewel found within the heart of every person living in the World of Eternal Sonata. In some people, it glows quite brightly, but in other people it barely glows at all. Polka is known to have an astra that glows brighter than anyone else's in the whole world. In the Church of EZI, a bonus dungeon in the PlaySation 3, there is a pillar that mentions astra in the Placid Parish area. It states that "When EZI created light, the birds and beasts became calm. When EZI created darkness, the birds and beasts became evil. And then, the birds and beasts came to know of the astra we all hold in our hearts."

An astra cannot be seen, and therefore it is unknown what one looks like. However, agogos have the ability to detect a strong astra, and glow when they do. The video game series Kingdom Hearts features a similar concept, with those whose hearts are dark becoming "Heartless" monsters, and seven princesses who each have a pure heart with no darkness inside.

An agogo is a gentle, spherical floating creature generally found within Agogo Forest in the World of Eternal Sonata. Naturally shy and secretive, they generally tend to avoid the presence of humans, but seem not to mind the presence of forest guardians.

Agogos normally emit only a dim light, but the legends of the guardians of Agogo Forest state that they will glow in the presence of someone who has a powerful astra. As such, they glow brightly in the presence of Polka, who, according to her mother, has an astra that shines brighter than anyone else in the whole world.

Count Waltz, the leader of Forte, has been searching for glowing agogos based on research that indicates that mixing them with mineral powder will increase its potency by a power of tenfold. This is later proved true when Legato drinks the enhanced mineral powder and transforms into the monstrous Ruined Body.

The Agogo Queen Mother is a special type of agogo that gives birth to all of the other agogos. It is said that she possesses mysterious powers, which prove to be of help when Polka collapses and falls into a comatose state due to her illness.

You have characters like Legato in his Ruined Body form who successfully ripped the fabric of time and space, and teared apart the entire world into a barren wasteland. The entire world happens to be a dream that has become real from Frédéric François Chopin's mind.

You also have two deities EZI and God (the God mentioned within Eternal Sonata is most likely intended as the Judeo-Christian God).

Retrieved from "https://vsbattles.fandom.com/wiki/Eternal_Sonata?oldid=3968596"
Community content is available under CC-BY-SA unless otherwise noted.