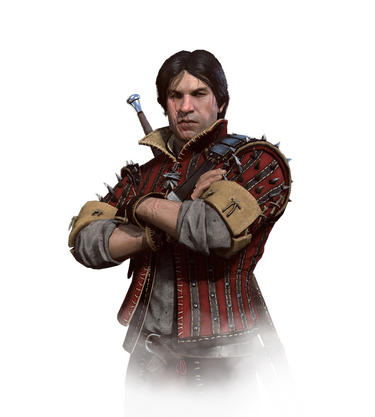 Eskel is a calm and reasonable witcher and Geralt's friend from his youth and, according to Ciri, he even resembled him apart from hair color and a long scar which disfigured his cheeks. They were raised together at Kaer Morhen and participated in the trials together.

Superhuman Physical Characteristics, Longevity, Regeneration (Low-Mid), Master Swordsman and Skilled Marksman, Strong Will, Very skilled martial artist and boxer, Enhanced Senses (Has night vision, can detect magic with his pendant, enhanced senses of smell and hearing, and can see through walls with certain potions. His Medallion also can sense Places of Power and nearby items), Acrobatics, Limited Body Control (Witchers are able to regulate the speed of their pulse and the flow of adrenaline, giving them unparalleled reflexes and strength), Information Analysis and Preparation (every Witcher prepares to their fights creating potions and analyzing opponent's weaknesses and powers), Can attack spirits while they are intangbile with certain oils/materials, Magic (Can perform rudimentary magic with his signs, creating potions suitable to the situation), Forcefield Creation and Attack Reflection with Quen (Can create a forcefield which reflects 50% of the damage it takes back at the attacker, and hitting said forcefield can set his opponent on fire), Fire Manipulation with Igni, Mind Manipulation with Axii, Telekinesis with Aard, Statistics Reduction, Poison Manipulation, and Electricity Manipulation with Yrden/Heliotrope (Both signs significantly slow down enemies. Yrden can poison and shoot lightning, as well as force spirits to become tangible), Healing (with Swallow potion), Stealth Mastery, Sleep Manipulation and possibly Limited Memory Manipulation with Somne (Somne is a sign that puts enemies under sleep and can possibly erase memories of that), With Potions, he can increase his physical abilities, Absorb Poisons to gain health, Induce Pain, turn his blood into poison and Slow Time after killing enemies, Reactive Power Level (with Wyvern and Succubus decoction, Eskel's attack power grows with every hit), possibly Power Nullification (with Moon Dust and Dimeritium bomb, he can stop opponent's transformation and negate magic around him), Explosion Manipulation (with Grapeshot), Light Manipulation and Status Effect Inducement (with Zerrikanian Sun), Fear Manipulation (with King and Queen), Madness Manipulation (with Red haze)

Attack Potency: Building level+ (Comparable to Geralt, had an equal duel with Caranthir Ar-Feiniel), higher with Aard (Aard can stun enemies that a witcher couldn't physically, like Earth Elementals and Golems), even higher with Potions (Potions make a witcher far stronger than their base form), silver sword ignores conventional durability of monsters to an extent (It is stated that monsters are vulnerable to silver, even though it is delicate and light)

Speed: Massively Hypersonic+ (Comparable to Geralt, was keeping up with Caranthir), higher with Potions

Stamina: Very high. Could fight for hours during Battle of Kaer Morhen and is comparable to fellow Witchers, including Geralt.

Intelligence: High (Skilled alchemist and monster hunter with decades of experience. Trained and carefully developed for combat ever since he was a child)

Weaknesses: Can only use a small number of signs consecutively before needing to recharge, taking too many potions can poison and kill him. His weapons require time-to-time maintenance to work at peak condition.

Retrieved from "https://vsbattles.fandom.com/wiki/Eskel?oldid=6071943"
Community content is available under CC-BY-SA unless otherwise noted.