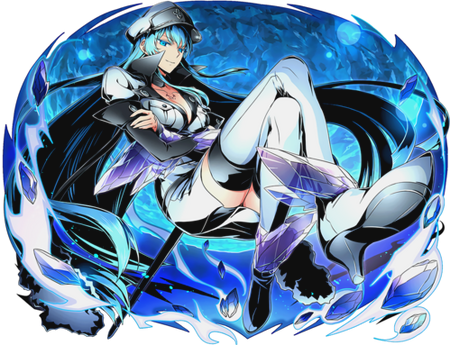 Esdeath is the primary antagonist of Akame ga Kill!.

A high-ranking general of the Empire and leader of the Jaegers, she is the Empire's most powerful fighting force, beyond even Shikoutazer, thanks to her immense powers coupled with her blood-thirst and an absolute belief in "Survival of the Fittest", honed since her childhood. She is feared as "a born reaper" and "a natural disaster with a wicked consciousness", a claim backed up by her strength and combat skills that clearly give off the image of sadism and ruthlessness.

Powers and Abilities: Superhuman Physical Characteristics, Ice Manipulation, Time Stop, Weather Manipulation (Ice storm via Ice Storm Commander-in-Chief), Danmaku, Summoning via Ice Cavalry, Master Swordswoman, Master Hand-to-Hand Combatant, Extrasensory Perception (Can sense the presence of her adversaries if they carry a shred of murderous intent and has a strong 6th sense), Pseudo-Flight, Aura (Fear, bloodlust), Afterimage Creation, Resistance to Empathic Manipulation and Willpower Manipulation [Unaffected by Scream], Mind Manipulation (Drank the entire chalice of Demon's Extract and resisted the Danger Beast's attempt to break her mind / take control of her, while even of cup of the blood can destroy a human's psyche), Sound Manipulation (Unaffected by Heavy Pressure's Trump Card, Nasty Voice, comparing it to a mere fly buzzing at her ear), Heat Manipulation (Her ice was completely unaffected by Die Leaguer's Fire Orb, and can resist being melted by Tyrant's fire-breath), and cold temperatures (Grew up in a snowy region, and could cover herself in her own ice without any sign of discomfort)

Attack Potency: At least Small City level+, likely higher (Treated Winged Incursio like a complete joke, who in his previous state, got stronger to the point of causing serious harm to Budo. Consistently referred to as the Empire's strongest, which would put her above the likes of base Shikoutazer and Third-Form Tatsumi, with the latter being wary about fighting her) | At least Country level, likely higher (Stated by Najenda to be a greater threat than Shikoutazer while in this state. She effortlessly one-shotted Tyrant and was able to destroy Murasame after being weakened by using Makahadoma)

Lifting Strength: At least Class M (Casually lifts men larger than her and Tatsumi cannot escape her hold without Incursio) | At least Class M, likely higher (Far superior to Tatsumi in this state, who in his second form was capable of sending Shikoutazer flying with a punch)

Durability: At least Small City level+, likely higher (Took only slight damage from one of Second-Form Tatsumi's strikes, though it should be noted that Esdeath's feelings distracted her. Far superior to all the members of Night Raid who can withstand Budo's attacks) | At least Country level, likely higher (Able to take hits from Ennodzuno Akame)

Stamina: Extremely high, can fight against a whole army and continue to fight powerful Teigu like Susanoo even after using Mahapadma, much higher with Ice Storm Commander in Chief

Range: Standard melee range with her rapier, several kilometers with her Teigu.

Intelligence: Gifted. Esdeath is an extremely skilled combatant renowned as the strongest soldier of the Empire, being a dangerously capable strategist and field commander who has led her forces to countless victories over the Revolutionary Army. Her skill is so great that Najenda believes only an army and ten Teigu users as skilled as Akame would stand a chance of defeating her if they all came at once. She prefers melee combat when not using her Teigu, easily taking on multiple foes in hand-to-hand combat at once and slicing through entire hordes of Danger Beasts with her rapier in a single movement. Her sadistic hobbies have given her a great understanding of human biology and is savvy enough to continually research and develop new abilities to use against her foes. However, for all her skill, Esdeath is still a bloodthirsty sadist who is more than willing to prolong a fight to savor it and her foe's suffering.

Weaknesses: Using Makahadoma drains Esdeath and she can only use it once a day. She requires a great deal of prep time to summon her Ice Cavalry in large numbers. Esdeath is a sadist to the core and will drag out a fight she's enjoying to savor it, which can distract her from her objective and keep her from finishing her foe off immediately.

Demon God's Manifestation: Demon's Extract: Esdeath's Teigu, is integrated within her body as it was the blood of a Danger Beast with the ability to control ice. She is able to use it for a variety of purposes like flash freezing foes to destroy them at the cellular level, firing icicles and boulders made of ice as projectiles, and even freezing time itself.

Key: Base | With Ice Storm Commander in Chief active

Nami (One Piece) Nami's profile (Both at Low 7-B, speed equalized)

Shantae (Shantae (Verse)) Shantae's profile (Base Esdeath, Both were 5 meters apart and fought in Fuyuki City)

Meruem (Hunter X Hunter) Meruem's Profile (Low 7-B Esdeath and 7-B Meruem were used, speed was equalized and both had full knowledge on each other)

Accelerator (To Aru Majutsu No Index) Accelerator's Profile (Pre-Headshot Accelerator and Base Esdeath were used, and speed was equalized)