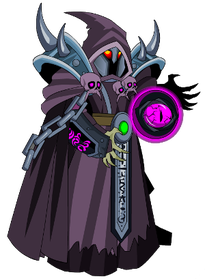 Chaos Lord Escherion was previously a Battlemage known as a "mystical warrior of Order and Light" but was Chaorrupted to become the first Lord of Chaos serving under Drakath and the main antagonist of the Chiral Valley story-line of the 13 Lords of Chaos Saga. His main objective was to summon the Lake Hydra to fulfill his duty of raising the first Chaos Beast but was unable to locate the Runix Cube to complete the ritual.

Tier: At least 9-A, Unknown with the Staff of Inversion

Attack Potency: At least Small Building level (Comparable to Hydras such as the Lake Hydra. Supposedly lifted and flipped an entire stone tower upside down), Unknown with the Staff of Inversion (Inverted the entire town of Mobius, twisting the buildings' appearances without causing any major destruction).

Lifting Strength: Possibly Class K (Flipped an entire stone tower upside down and can balance it on its top)

Striking Strength: At least Small Building Class, Unknown with the Staff of Inversion

Range: Extended melee range normally, Tens of meters with the Staff of Inversion

Intelligence: Above Average (Was previously a respected battlemage and likely possesses an astute knowledge of mystic arts)

Weaknesses: The Tears of the Mother are able to remove one's Chaos powers.

Retrieved from "https://vsbattles.fandom.com/wiki/Escherion?oldid=5385985"
Community content is available under CC-BY-SA unless otherwise noted.