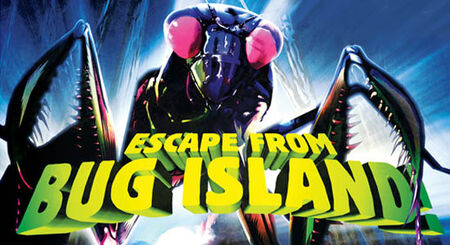 Escape from Bug Island!, titled Necro-Nesia (ネクロネシア, Nekuroneshia) in Japan, is a single-player video game developed by Spike and released for the Nintendo Wii in 2006 (2007 globally). The game is a third-person survival horror game in which Ray, a young man, and his friends get stuck on Beelzebub Island (Bug Island), which happens to be infested with large mutant insects and creatures that terrorize Ray throughout the game.

Escape from Bug Island! is an averagely powered verse with most characters ranging from Street level humans and lesser creatures to Building level gargantuan sized beasts.

The game features a nebulous concept dubbed the time cave. This is a cave with mystical and unquantifiable powers over time. After witnessing his friend Mike die a brutal death, Ray makes his way into the time cave and finds Michelle. She ends up being killed and Ray is knocked out. He wakes up back at the beginning of the game, but with his memories intact. This gives him a chance to do everything in his power to prevent the demise of his friends so they can all escape Beelzebub Island together.

Retrieved from "https://vsbattles.fandom.com/wiki/Escape_from_Bug_Island!?oldid=6485509"
Community content is available under CC-BY-SA unless otherwise noted.