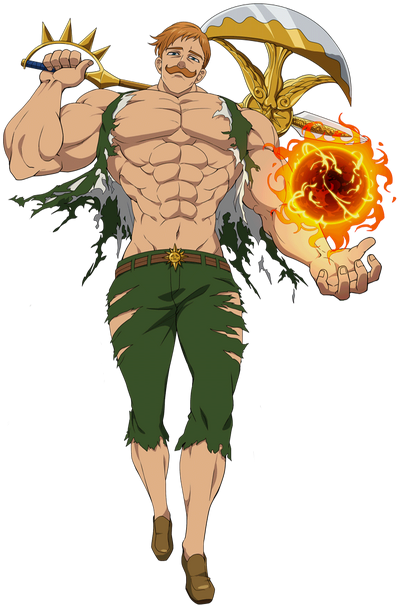 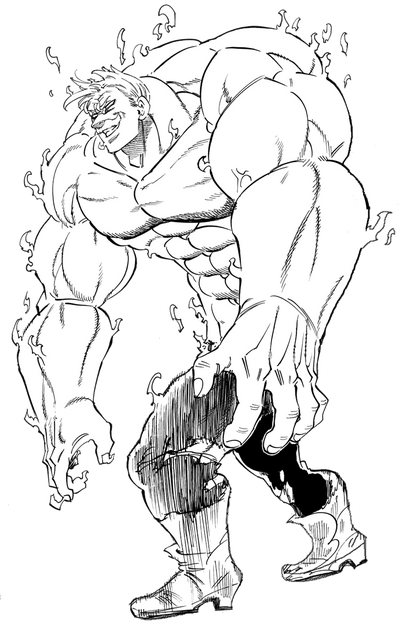 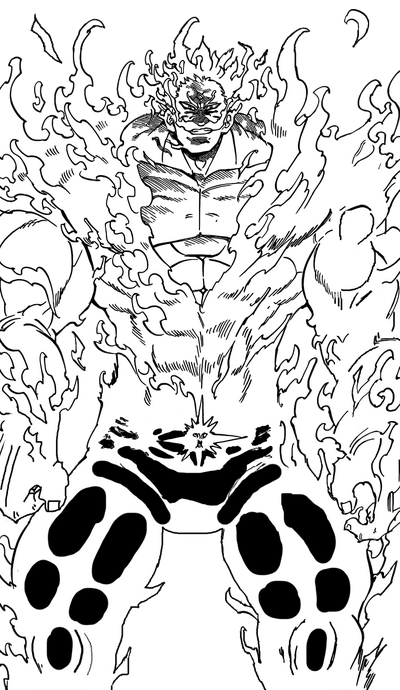 Escanor is the Lion's Sin of Pride of the Seven Deadly Sins. He was born into royalty but his magic power coupled with an unfortunate accident caused his family to fear and scorn him. He was smuggled to safety by a mysterious woman named Rosa and grew to adulthood coping with his unique circumstances on his own. His power changed both his body and his personality, making him timid, small, and weak at night but arrogant, large, and strong during the day. He was discovered by Meliodas and Merlin and joined the Seven Deadly Sins. He considers the two of them his saviors, especially Merlin, who he fell deeply in love with.

It was later revealed that Escanor's unique power is actually one of the four Graces bestowed by the Supreme Deity of the Goddess Clan onto her Four Archangels. It is unknown how Escanor's Grace came to him, nor why he hasn't yet died from its power despite being only human.

Powers and Abilities: Superhuman Physical Characteristics, Magic, Extrasensory Perception, Expert Axe Wielder, Regeneration (High-Low), Fire Manipulation (Can emit flames far hotter than natural fire), Regeneration Negation (Mid) (Melascula was unable to fully heal from Sunshine's flames on her own), Heat Manipulation, Light Manipulation (Can emit intense light with the same properties as sunlight), Air Manipulation (Can generate air slashes), Flight (via riding on Cruel Sun), Statistics Amplification (His power steadily increases from dawn until it reaches its peak at noon), Empowerment (Can imbue Divine Axe Rhitta with Sunshine), Summoning (Can summon Rhitta from extremely far distances), Resistance to Fire Manipulation, Heat Manipulation, Soul Manipulation, and Mind Manipulation (Unharmed by his own fire and heat. Warded off both Melascula's attempts to devour his soul and Gowther's attempts to destroy his mind), Large Size (Type 0) as "the One", Likely Resistance to Commandments (Graces make their holders immune to Demonic Curses)

Attack Potency: Human level (His strength is that of a normal Human), Island level with Pseudo Sun (Transformed into a weaker version of his day self that is on par with Galand), at least Large Island level with Rhitta (Can use Rhitta as an artificial Sun, allowing him to fight under night. Can draw out enough power to be on par with his Near-Noon state) | Island level at Dawn (Can effortlessly lift up Rhitta which Unsealed base Meliodas could only drag across the ground), at least Island level+ during Mid-Morning (Much stronger than Estarossa and brought him to his knees with a single punch), at least Large Island level Near Noon (Far stronger than Tarmiel. Managed to slightly injure Assault Mode Meliodas), Country level as The One (One-Shot Post-Revival Assault Mode Meliodas. Overpowered Full Power Zeldris) | Large Country level (Fought and overpowered Full Power Demon King Zeldris physically)

Speed: Massively Hypersonic+ (Evaded attacks from a casual Izraf), higher with Pseudo-Sun (Is on par with base Galand), and with Rhitta (Can augment his power by using Rhitta as a sun) | Massively Hypersonic+ at Dawn (Is more powerful than Unsealed Base Meliodas who casually blitzed base Galand), much higher when it is close to Noon (Blitzed Estarossa, somewhat kept up with Post-Revival Assault Mode Meliodas) | At least Massively Hypersonic+ (Comparable to Zeldris with all of his abilities) | At least Relativistic, with Relativistic+ reaction speed (Kept up with Full Power Demon King Zeldris in combat)

Durability: Human level. Island level with Pseudo Sun, at least Large Island level with Rhitta | Island level at Dawn (More durable than Unsealed Base Meliodas), at least Island level+ during Mid-Morning (Took only minor damage from double his own attack power when Estarossa used Full Counter on his slash), Small Country level Near Noon (Took several hits from Assault Mode Meliodas and kept fighting, tanked the blast of his own Full Countered Cruel Sun with no damage), Country level as The One (Regarded Assault Mode Meliodas' Divine 1,000 Slices as nothing more than an itch. Should be comparable, if not superior to his own power) | Large Country level (Tanked a barrage of punches from Demon King Zeldris)

Stamina: Extremely high (Even in his night form he continually dodged Izraf's attacks for hours)

Intelligence: Escanor is almost completely useless in combat during the night, being timid, submissive, and crumbling under pressure. However, he has shown a great deal of cunning at times, providing Galan and Merascylla with alcoholic drinks to distract them until sunrise. During the daytime, he is insufferably arrogant and somewhat flamboyant, spouting entire poems to Merlin in the midst of combat and growing angered should one mistake them for an incantation of his ability. However, he is also an incredibly skilled and mighty combatant, so much so that he effortlessly overpowered and killed the Vampire King Izraf and two members of the Ten Commandments on top of being recognized as the strongest member of the Sins, which includes the likes of Meliodas (who helped to seal the Ten Commandments), King (who can ward off entire kingdoms of Holy Knights), and Ban (who has killed Demons in the past).

Weaknesses: Escanor has no control over his Sunlight ability, he will continue to grow in strength depending on what time of day it is and his power becomes completely unmanageable at its peak. At night he becomes weak, timid and submissive. Pseudo-Sun only gives Escanor a few seconds of constant power boost, which then gets him back to his weaker state. Though this is irrelevant if he's using Rhitta. If using Rhitta as a sun, his form will be lost if Rhitta is knocked out of his hand, and its stored power is finite. During the daytime he's rather arrogant, but this is mitigated somewhat by his combat skill and power in addition to his willingness to simply blitz targets. Escanor's Sunshine cannot display its full power during rainy or cloudy conditions. | His form as "The One" only lasts for as long as it is precisely high noon, fading the minute noon passes, after Noon his power will begin to decline. | The One Ultimate requires Escanor to convert his own life force into magic power 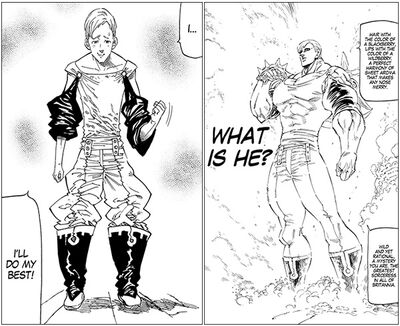 Sunshine: Escanor's Grace was originally bestowed by the Supreme Deity to the Archangel Mael, and eventually passed to Escanor through unknown means. Due to Sunshine, Escanor changes form throughout the day, spending the night as a weak, frail man and the day as a strong, muscular warrior. His personality changes along with his body, becoming extremely timid while weak but extremely prideful while strong. At dawn, Escanor undergoes a massive jump in power, and continues to get stronger every second until noon, at which point his power reaches its peak. After noon he gets gradually weaker until he shifts back into his frail form after sunset. While he spends most of the morning with an idealized musculature, when noon is near Escanor becomes grotesquely muscular, to the point of looking inhuman. At noon he turns into The One, who Merlin described as "the invincible incarnation of power."

In addition to granting him great power, Sunshine allows Escanor to produce enormous quantities of heat and light. He normally keeps the aura somewhat contained, but as noon gets closer he melts the ground around him and even his allies' metal armor. He can flare his aura at will to produce an immense burst of light and heat, seemingly melting Edinburgh even at dawn. 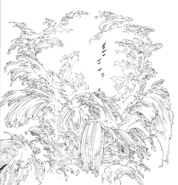 and destroys Edinburgh
Add a photo to this gallery

Notably, Sunshine-imbued attacks can prevent regeneration up to a certain extent. Though Izraf's wounds closed, the heat remained and continued to damage him. Melascula was unable to heal her burns even after she had recovered her energy. In addition, Escanor's soul itself is imbued with Sunshine and severely burns those who attempt to extract and absorb it, returning to his body on its own.

and prevents healing
Add a photo to this gallery

Also note that the heat and fire produced by Sunshine is superior to natural fire, as it was able to instantly vaporize Izraf's Black Full-Plate, which he said was impregnable even to the Demon Clan's purgatory fire. Purgatory fire burned down the Fairy King's Forest, which is immune to natural fire. 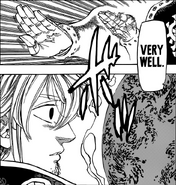 to Lake Penace
Add a photo to this gallery

and detonates
Add a photo to this gallery

Divine Axe Rhitta: An enormous one-handed axe so heavy that even Unsealed Base Meliodas and Base Galand have difficulty lifting it, much heavier than Diane's enormous war hammer Gideon. It is able to store the immense heat produced by Escanor during the day, allowing him to protect his surroundings and concentrate his attacks. He can call his axe to him from great distances by raising his hand in the air, causing the axe to fly to him. By saying "Sacred Treasure Release" Escanor can unleash an immense burst of heat and light, blinding his opponents. 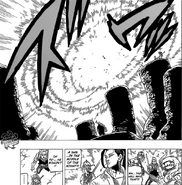 Key: Night | Day | The One Ultimate

Retrieved from "https://vsbattles.fandom.com/wiki/Escanor?oldid=7003901"
Community content is available under CC-BY-SA unless otherwise noted.